A magnificent trumpet fanfare sounded, and magical sparks filled the sky. A knight on a majestic horse led the march to the city’s main street from the castle, and Ren and Ruri were right in the middle of the procession.

Yep, it was a parade for the departure of the heroes.

Ren and Ruri were each riding a horse. Their waving and smiling was very much like a royal family. In contrast, Ren was waving awkwardly. His face was red, and I immediately knew that there was considerable tension and embarrassment in there.

As I was staring at the parade, Lusha pulled up my sleeve.

「Hey, are those two the ones from the same hometown as you?」
「That’s right.」
「You need apricot grass to treat that Hero, right? But, he doesn’t look at all like he’s cursed. I wonder if maybe it’s not the painful type…」

I agreed with Lusha’s worries. Ren was supposed to be suffering from a curse, but he hadn’t shown any signs of it. Was it his nature of not wanting to make people worry about him?

It’s not like I want to be alone after coming to another world.

Actually, I was glad that there were three of us here, but if I wasn’t around, there wouldn’t be much of an opportunity to investigate possible ways to return to Japan.

It hasn’t yet been confirmed that this country’s method is the only way to return.

But I have something to do before any of that.

「I have to go to the Demon Continent too.」

I’ll be ready to leave as soon as my equipment is ready, so I’ll be a little late.

This time, I want to help Ren and Ruri. My combat strength is perfect too, because Lusha will come along. I’ll find the apricot grass in the Demon Continent before anyone else.

While I was thinking about that, I heard a voice calling me unexpectedly.

Man, he was about to call me by my surname. I answered him quickly, though I couldn’t help but chuckle.

She greeted him in a panic and shook his hand. From the looks of things, she never thought she’d actually have a conversation with Ren.

Ren smiled and told her that he was relieved to hear that.

He was worried when I left the castle alone. He’d already heard about my situation from Ruri when we met back then, but he said he’d wanted to see me for himself.

「I’m fine. I’m the one who should be worried about you… don’t force yourself too much.」
「Wha-? S-Sakurai, how much did you hear?」
「Everything, you know. E・ve・ry・thing!」

Ren laughed when I told him that, saying “You found me out, huh?”

You can pass through the Sea of Trees, a deep forest which directly connects the two by land. You can also pass through an undersea dungeon which has entry points in both continents. Or, you can go by sea.

The sea route is the least dangerous, but also the most expensive. Since there’s two of us, me and Lusha, the costs would be doubled. Even selling all of our assets wouldn’t be enough to cover it, so this isn’t an option.

I was left wondering whether to go through the dungeon or the Sea of Trees.

「Well, I’ll figure something out. Watanabe, you should think more about yourself than me. And that girl Ruri, you’re worried about her too, right?」
「That’s right, and I’ve been relying on Ruri’s power until now.」
「Aah…」

Certainly, Ruri’s power is enormous. If she levels up more, she’ll have even stronger attacks than the Hero… or at least, that’s what I was thinking.

「I’m only good up close, but Ruri has high offensive power at long range, you know? That’s why she’s always been such a big help.」
「Oh, I see. Definitely…」

A Wizard’s power at a distance is excellent. However, I think that if she learns the right skills, Lusha’s strength won’t lose to Ruri’s. To that end, we first need to raise her level. Then we need to get more skill books.

…What if I just go by myself to the boss room in the dungeon, go to the back room where the treasure chest is located, and take the contents?

While I was thinking about that, someone behind me suddenly shouted.

Wait, who is that?

The one shouting in surprise was a thin man, his trembling finger pointing from the sleeve of his robe while muttering, “Why?”

――Ah. I remember now, this guy was there when we got summoned into this world.

He was polite at first, but as soon as I said I’d raised my evasion stat, he got angry. Along with the King, he’s also responsible for putting put me in jail. His face turned red when he saw me.

「Ah, is it possible you’re the one who called me this morning?」
「W-what are you talking about! I don’t know anything! What are you doing here at Watanabe-sama’s parade!?」
「It’s not like I’m doing anything, though. If a friend of mine from the same hometown said he would have a parade like this, wouldn’t it be normal to come have a look?」

The thin man’s face turned red in anger as he glared at me.

As we talked, I realized that many people had gathered near us, apparently wanting to know why the Hero stopped in the middle of the parade.

Moreover, because so many had gathered near the Hero, the parade itself had stopped moving. If any of the country’s higher-ups came and saw this, they wouldn’t be happy. The man huffed.

「Watanabe-sama, the whole parade will stop if you keep this up. Please keep moving.」
「Ah, I’m sorry. I’ll move on.」

Ren acknowledges the man’s words with a wry smile.

「Well then, Sakurai, it’s time for me to leave. Don’t push yourself too hard, okay?」
「Come on, that’s my line.」

I waved after Ren as he continued with the parade.

From the back, his figure was dignified, with good posture, but he still seemed tired somehow.

I can’t help but imagine the hard times he must have lived through until now. Ren is always kind to everyone, and he can’t leave those in need to fend for themselves.

In some sense, he might be the kind of person that some would find it hard to live with.

I wonder, if I was still in the Hero’s group, would things be different now?

「No, stop thinking about that.」
「Hiroki?」
「…it’s nothing. Anyway, should we get something to eat while discussing how we’ll get to the Demon Continent?」
「That’s right. We need to find the apricot grass quickly, after all.」

In the inn’s cafeteria, we spread a map on the seat, considering the ways to the devil continent. 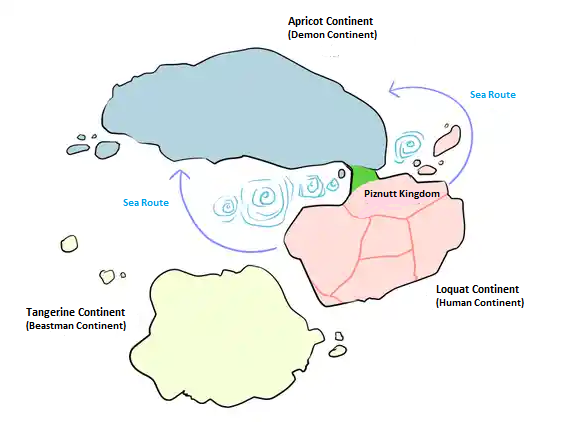 「We are here, in the capital of the Piznutt Kingdom.」
「So if we go by boat, the journey would be quite a long way because of the ocean currents, right?」
「Correct. Besides that, I heard we won’t have time to rest after we depart, because there are many strong monsters along the sea by the ship’s route.」

Taking a ship from the Tangerine continent seemed to be the least dangerous method, but of course the difficulty was we’d have to go to that continent first. Since we didn’t have the money for a ship anyway, there was no point discussing it further.

「We have no choice but to go through either the directly connected Sea of Trees or the Undersea Dungeon that connects the two continents.」
「Well… I was thinking the dungeon is the safest route, because the dungeon has safe zones on the stairs, so we can relax more easily than while going through the Sea of Trees.」

I gave my opinion, but of course there were other problems.

Dungeons have bosses. I don’t know how strong it would be, but if we can’t beat it or avoid it, we’d have to turn back.

When I looked at Lusha, she was similarly troubled.

「I’ve heard that dungeon’s monsters are pretty strong… but if we’re going to the Demon Continent, we need to raise our level anyway. Considering that, I think it’s better to proceed while raising our level in the dungeon.」
「Leveling up is certainly a challenge.」

There was a considerable level difference between me, Ren and Ruri. That’s why I wanted to raise it as much as possible on the way to the Demon Continent.

「So, we’ll go through the Undersea Dungeon?」
「Yeah, I think that’s fine!」

We chose to break through our limits and level up on an exciting route.

Author Note:
The map is hand drawn by me. I’m sorry if it’s difficult to read, but I hope you can get the gist of it.