Here’s a bonus chapter brought to you by Patreon.

And also, please welcome DarkBlazeWolf in this project, he will help me for this novel as an Editor from today onwards. I hope it will give a better reading experience for you all dear readers.

A girl was running desperately through the forest. However, the pale white dress that the girl is wearing, which can be seen as fine quality by anyone, isn’t suitable for running. Not only that, but the beautiful blonde hair that looks to be extracted from the sunlight has become dirty while running, and now has lost its radiance.

Several people who hid their faces behind a hood were chasing behind such a girl.

The girl was running barefoot in the forest with a bad footing.

However, she stumbled over a tree’s root because of the dress that is unsuitable for running and the forest environment. The mysterious group couldn’t miss that chance and immediately surrounded the girl. The girl realizes that there is no longer to escape, but she sharpened her jade eyes and glares at the group.

“You people! Do you know with whom you’re chasing, I am the first princess of Alceria Kingdom!?”

The mysterious group exchanged glances at the girl’s bullish attitude while sneering.

“Why, you said? Saying such a ridiculous thing. As for what reason you’re getting attacked… Should I make you remember with your body?”

The girl ─ Lexia became lost for words at what the assailant said.

“You’re a hindrance, you know. You filthy mixed blood!”

“My blood is not dirty…”

One of the mysterious people magically created a mass of soil and shot it at her, who was resolutely appealing. Lexia instantly rolled over the ground, but his magic power was apparently high, and the impact caused more damage than expected.

“Quit stalling for time. It’ll be better if you just obediently die from the beginning…”

“Your escort is pitiful, too, right? As a result of escorting you, they’re getting attacked by us.”

“They were desperate to let you escape, but aren’t those Knights dead by now?”

The mysterious group threw unpleasant words at Lexia, who was crouching in pain. Lexia was the first princess, but she was a child born between the present King and a concubine ─ a slave. More to say, her mother was not a “Human”. She was a “High-Elf” which has even better appearance among the excellent appearance of an “Elf”. The King fell in love at the first sight with such a High-Elf slave and loved her as a concubine, and before long, Lexia was born.

However, soon after giving birth to Lexia, her mother died. The king was very sad and raised Lexia with a worthy of care. But one day, an incident occurred. High-Elf who originally possessed high magic and Lexia even as a Half-Human inherited their excellent appearance and magic, and one day her magical power went out of control. As a result, the first prince who was nearby was seriously injured.

Fortunately, there were no after-effects left, and he had been healed completely, but… Lexia was alienated by the queen, the mother of the first prince, and the nobles which on the first prince faction. Due to her origin of birth, she has been subjected to various types of harassment behind the King’s back.

She’s grateful to her mother for giving birth to her, and she doesn’t have a grudge against her father. However, the surroundings attack such a Lexia mercilessly. Even if she’s from the royal family, it will become misfortune depending on the circumstances. Lexia had been desperately living before such an unavoidable reality, but now she is about to be killed like this, she looks back on her life and tears fall involuntarily.

If she had lived a more normal life… Yes, she had thought about it.

“Now, it will be silly to have an idle-talk and be attacked by monsters. Go die quickly.”

Lexia could only sob, muffling her voice in this very miserable and helpless situation. One of the men of the mysterious group tried to shoot his magic mercilessly toward Lexia ─ it was at that moment.

Suddenly, a monster attacked the mysterious group. With dark brown skin and golden eyes like those of reptiles. Bulging muscles, with a height as tall as an adult man, and wore a fine-quality armor on its body which gave off a very intimidating aura. Gushing nasal breath from its big aquiline nose, and then released a strong swing from its giant sword that was as tall as itself. The blow was tremendous, and the mysterious group that tried to unleash their magic at the Goblin General turned into a mass of meat in front of its giant sword.

Those who were about to kill Lexia were killed in an instant. Lexia’s expression was tinged with fear by that fact, and she tried to run away in a hurry, but she doesn’t have the strength to move her legs. While she was unable to move, the Goblin General had already annihilated the mysterious group with its overwhelming power. A large amount of blood and pieces of flesh were scattered all over the area, and the goblin general was covered in blood.

─ It was an absolute being that cannot be denied.

Before that, Lexia’s body has given up the will to live despite her intentions. No matter how much she tried to escape, her body won’t listen at all. After it finished the slaughtering of those mysterious group, the Goblin General turned its eyes to Lexia, who was tinged with fear and despair. She was shot by a sharp glance, and finally, even her will to live was lost.

The Goblin General calmly approached the stunned Lexia. And when it arrived in front of Lexia, it lifted up its giant sword. 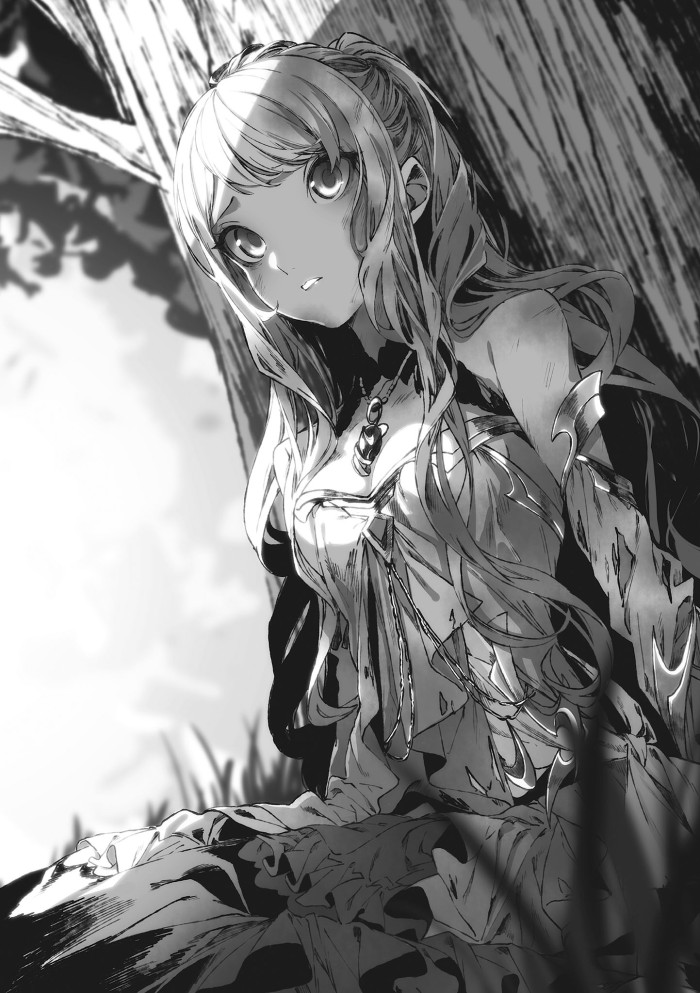 She will die here without any suffering. With murky thoughts of death, she watched the sword that slaughtered the mysterious group.

Suddenly, something flew toward the Goblin General. However, the Goblin General sensed it just before the flying object collided, and prevented it with the giant sword which had been swung up before. But it wasn’t the only attack. Further impacts striking the giant sword which had prevented the flying object. The impact is tremendous, and even the goblin general who possessed a strong body can’t endure it and is greatly blown away. The Goblin General turned its gaze which was been filled with anger to the new intruder as it regained its posture.

And when Lexia turned her gaze in the same direction as the Goblin General ─.

She found out an elegant young man rushed over in a hurry, with glossy black hair and eyes that reminiscent of the night sky, which somehow brought up an atmosphere of a foreign country. Despite the desperate situation, Lexia for some reason felt a bit reassured the moment she saw the young man. Thus, because of that feeling of security, her thread of the tension has broken, and she fainted on the spot.

29 thoughts on “I Got A Cheat Ability In A Different World, And Become Extraordinary Even In The Real World – Vol 1 Chapter 3 Part 2”