Another chapter brought to you by Patreon.
Please enjoy~

A scream rang out in the forest.

Canaan was being chased by a herd of boagnons. I’d like to tell her to shoot her magic rather than just running away, but I won’t intervene. If I help her now, I won’t be able to cultivate her fighting instincts. Let’s push her to do her best, for her own sake.

I literally, physically ignored Canaan as she ran towards me. If she wanted to resent me, she was free to do so. Engrave those feelings in your flesh and blood! That said, the concept of a “demon” exists in this world too, huh? 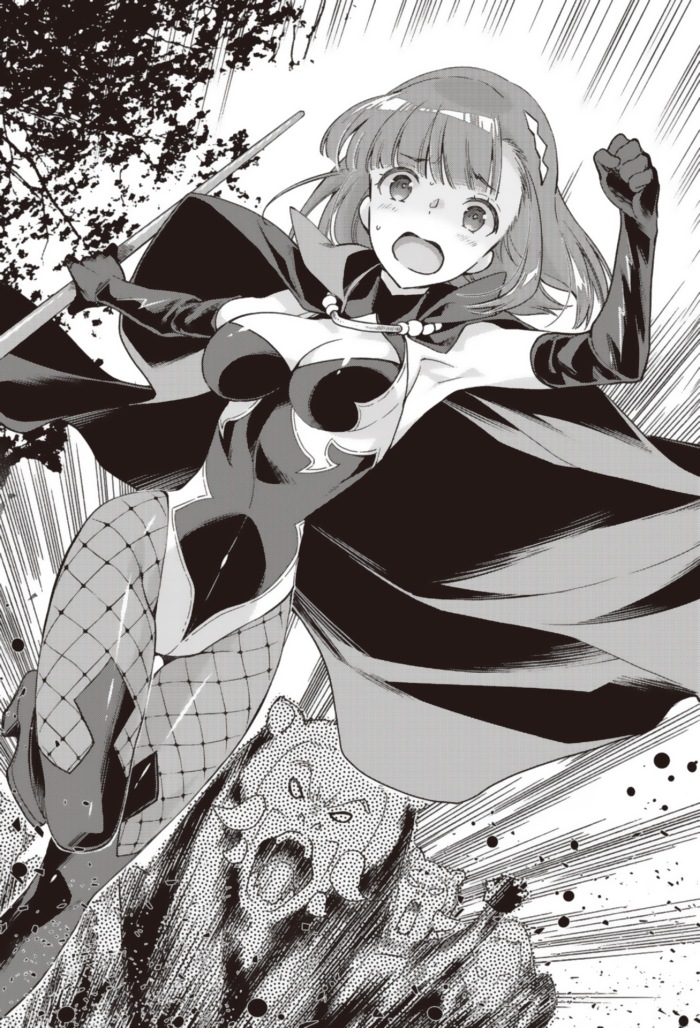 “Master…” Canaan screamed while gasping for breath and glaring daggers at me. She didn’t say a single word of resentment after she returned from annihilating the herd of boagnons, but her eyes were full of criticism, approaching the level of a grudge.

I ignored her expression. “Well done. Here, eat this.”

All of her external wounds were cured after the first slice of grilled meat, and her body returned to a healthy state by the second slice.

“You should have recovered enough from those two slices, right?”

I was talking to myself inadvertently, and ended up confusing Canaan.

“I’ve had many harrowing experiences, including whole bone fractures to the point I couldn’t even move, you know. You can still go, right?”

She cried out in fear. I might have broken her. Joking aside, she’s reached level 150. After her limit break, she did power level several times, and when she reached level 150, I threw her into a herd of boagnons, leading up to this moment.

The firepower of a magician at this level has become insane. From above, this forest would now look as if crop circles have been burned into it. I assume Canaan’s [Fire Magic] has reached a level that could overwhelm even a national military.

Extinguishing the fire on the trees with [Spring Water] is pretty difficult.

If she fought calmly, she’d be able to kill all of those boagnons in an instant, but Canaan doesn’t seem to have much experience with combat, and it was such a sad sight to see her run away from them while taking potshots rather than standing firm.

So let’s make her fight them again!

“If you remember what you did earlier, you can kill them all instantly, you know!”

The boagnons found her because of her loud voice, so she got chased around again. If she likes playing chase that much, next time I’ll have her play with the Hyena Wolves.

“Hey, it’ll get dark if you don’t wipe them out quickly, you know.”

The boagnons surrounded her, and soon the sound of battle rang out from that general direction. Do your best, Canaan! I’ll always be rooting for you!

Canaan shrieked when a boagnon threw a stone at her. As a magician, she’s usually weak to hits like that, but she managed to endure it somehow, perhaps because of her excellent equipment. It would be nice if she could shoot magic calmly even under those circumstances, but… unfortunately, she fainted.

It can’t be helped, so I cut in and started swinging Black Mist around. The boagnons flooding toward Canaan immediately ran away at the sight of me.

“That’s it for today… she doesn’t seem to have the will to fight anymore.”

She doesn’t have strong enough survival instincts. It’s one thing to think about it, but the reality of the Great Borf Forest is that strong survival instincts and willpower are mandatory. It’s actually okay to run away, but there’s no point if you aren’t actually capable of escaping.

I figured that out after experiencing it so many times, but Canaan hasn’t yet. Even now, in human society, you can be overwhelmed by a strong person. But those who aren’t sensitive to danger, or can’t manage a crisis, will be haunted by it, their will painfully destroyed.

That’s why I’ll force Canaan to persist through this hell.

Before evening, I backtracked close to Algria town with Canaan in my arms. She was blacked out, but not seriously injured, so I thought it was a good time for her to wake up.

If she wasn’t so filthy, she might have had a cute sleeping face. In reality, she looked miserable, her face covered with dust, tears, and snot. It was a tragedy for such a beautiful face. Right, since I’m a good person, I applied the [Clean] skill to Canaan.

And then I let go of her, so she fell according to the laws of gravity, landing butt-first on the ground. She let out a sound unsuitable for a woman of such beauty.

She stood up while rubbing her sore butt, and we entered Algria. When we returned to the mansion, Beese appeared in front of me. Canaan paled, still apparently afraid of Beese, but an improvement from before when she simply fainted.

“Did you find anything?”

He held out a sealed letter that he found… somewhere. I say it was a sealed letter, but actually it was already open, so I took it out and looked through it. Written there were instructions to dispose of the real culprits after killing the feudal lord’s son, Dolce, and to find the opportunity for Dokum, the “leader”, to become Baron.

It’s nice to think of how the culprits are no longer in this world.

“Where did you find this?”

“I found it in the mansion of a man named Dokum.”

I did tell him to search Dokum’s house in addition to the maid, but it turns out Dokum really was guilty, as expected.

“I can slip through walls, so finding hidden rooms or safes is easy, after all.”

“I see, well done. But, who’s this Erich… Canaan, do you know anyone named Erich Hussel?”

She still had a pale face, and let out a short gasp. I might have startled her.

“What’s his relationship with Count Abbas?”

“I don’t know too much about the upper class… But if I’m not mistaken, Rotten-sama’s wife was a blood relative of Count Hussel.”

“What is Rotten’s standing in this mansion?”

“Rotten-sama is the head of the Count Abbas branch family, and should eventually take charge of the Knights.”

“Is it correct to consider the head of the branch family to be a blood relative of Count Abbas?”

“Yes, now that Dolce-sama has passed away… I wonder if there’s a possibility of him being the next head after Alterias-sama…”

“But the Count has Allie, right? Is it impossible for Allie’s husband to take charge as the head of the family?”

“It is possible, in fact, in which case it’s highly likely that Rotten-sama’s son will become Alterias-sama’s husband…”

In other words, the death of Dolce, the only obstacle, wouldn’t hurt Rotten, no matter what angle one views it at.

However, Rotten’s name is not mentioned anywhere in this letter, and I wonder if it was really written by Count Hussel. I instructed Beese to investigate Count Hussel, and collect a confirmed sample of his handwriting if possible.

After Beese is gone, Canaan let out those words bit by bit.

“Well, it’s a common story for a fool to be enticed to draw a bow against his own master, baited with potential rewards of nobility and power.”

“I don’t know if he’s really involved in this assassination plan, that’s why I need to find out more.”

Canaan was thinking about something with a dark expression. She must have been thinking about Dokum, who was backed by Count Hussel, and it was possible for Rotten to also be behind this. The opponent was someone with authority, and her own former boss. Circumstances like these only make me more distrustful of humans.

Canaan fell asleep early, perhaps because of her fatigue from the special training. I watched her sleeping face and patted her cheeks. I plan to ask Dokum why he put Canaan through this.

Now I need to examine background information. I left the room using Hermit’s Coat, and went around the Knights’ rooms to see if any of them were talking about Rotten. This Hermit’s Coat was really convenient since no one would notice me even if I stood right in front of them.

However, from the way the knights discussed Rotten, he was a good man, and matched my impression of him. I searched around that day until midnight, but I didn’t hear any knights talking ill about Rotten, much less anything about him being involved in the murder of Dolce.