I’m sorry to my dear patrons and readers, I just got back from training and business tripm so that’s why I wasn’t able to deliver the chapters as usual. I’m sorry for the inconveniences, and thank you for your patient. And here’s the chapter for today, but rest assured, there will be more to come for this week, enjoy~

A lot of mysteries still remain shrouded in the Great Devil’s Nest. That is where Yuuya’s master, the White Rabbit, was confronting a certain monster.

Although it was such a monster, the Lion Emperor could not move in front of the little rabbit. That’s because it knows that if it moves even the slightest bit, it will be defeated at that moment.

While the Lion Emperor was desperately trying to figure out how to get out of this situation, Usagi was extremely carefree.

(Fumu… if it’s like usual, it will be over instantly, but…)

As Usagi said that, he looked at his right hand. At that moment, a ball of water emerges in Usagi’s right hand.

(If it’s only with magic, what would happen…)

The moment Usagi’s consciousness shifted to his right hand, the Lion Emperor didn’t miss the opening and jumped at Usagi. The moment it jumped on Usagi, the place where the Lion Emperor was standing earlier was severely gouged out, and with the speed at which the Lion Emperor moved, the surrounding [Black Hard Tree] was knocked down by the wind pressure alone.

The Lion Emperor was convinced that Usagi had been killed with this full strike.

What was in Usagi’s right hand earlier should have been a small water ball. Still, the moment it was pressed against the Lion Emperor’s back, it turned into a mass of several dozen tons of water, literally crushing the Lion Emperor.

Usagi that knocked down the Lion Emperor with that blow tilted his head in frustration as he landed.

(U-umu… Maybe it’s because I don’t have enough magic power; I guess I can only do that much… If possible, I would have liked to use more powerful magic like Yuuya’s, but…)

At the time when Yuuya was involved in the problems of the Alceria Kingdom, this is how Usagi continued to train in the Great Devil’s Nest, and as a result, he continued to hone his studies in search of a result that was as satisfying as possible.

Of course, he didn’t miss the training of kicking as well as magic, and he was also thinking about the next content he was going to teach Yuuya.

(Sigh… well, I guess I’ll just have to give up on magic power only because of my race…)

It was the moment when he said that with some sadness and tried to find a magical cultivation partner again.

Usagi hurriedly jumped up from the spot. Then something sharp passed through the place where Usagi had been standing just now at a tremendous speed. Using the air as a foothold, Usagi prepared his stance and landed safely, and while he was wary of his surroundings, he shouted.

(You have the courage to pick a fight with me. Show yourself.)

A girl appeared in obedience to Usagi’s words. Her skin was white and smooth, and her hair was as white as snow. Dressed in a white sleeveless dress, no great emotion was visible on her face.

Her gray, somewhat mysterious eyes were coldly staring at Usagi.

(Who are you… why did you attack me out of the blue…?)

However, the girl did not answer Usagi’s question. Nevertheless, the hostility radiating from the girl didn’t change, and Usagi narrowed his eyes at such a girl.

(…It seems you don’t want to talk. Then I’ll have you tell me the reason even if I have to force you to speak up…!)

When he said that, Usagi accelerated at once and instantly thinned the distance with the girl.

Usagi unleashed a kick at the girl’s head with minimal movement. That kick was indeed a full-bodied blow with no holding back. Even Yuuya was still unable to deal with this Usagi’s all-out movement. It was expected that the girl would also receive Usagi’s kick.

The girl effortlessly avoided Usagi’s kick. Then the trees around the position the girl had been standing in just now disappeared. Usagi’s kick had contained that much power.

Once Usagi’s question was asked, the girl just kept a blank expression on her face.

(Refusing to speak, huh… Then? Are you one of the “Saints”? How dare you attack me? Is this a publicity stunt?)

The unexpected words made Usagi tilt his head more and more. It’s because the girl’s purpose is completely unknown. But without paying any attention to Usagi’s condition, the girl told him calmly.

“I will destroy everything in this world. This world, which has no salvation, is not worth defending.”

“Which is why I want you to cooperate. To destroy this world.”

Usagi let out a dumbfounded sigh and stared at the girl as if he was shooting through her.

(No salvation? Don’t decide that on your own. I’m fulfilled. Don’t drag me into your selfish agenda. What do you want in the first place? Who in the world do you think you are?)

“Silence. If you refuse it, then I’ll just have to kill you. All that is useless will be eliminated. Same goes for you.”

Just as Usagi jumped at the girl again and was about to unleash another powerful blow, Usagi felt a chill in his neck and changed direction, following the sensation. Just then, something suddenly fell between Usagi and the girl.

It crashed into the ground, causing the ground to cave in significantly, changing the terrain around it. Usagi turned his attention to the thing that had fallen while adjusting his stance in the air and let out a surprised cry.

After the girl’s words that told him so matter-of-factly, the sound of many things cutting the wind came into Usagi’s ears.

He tried to find the sound source, but the sound seemed to be coming from all directions.

──Suddenly, a huge amount of arrows flew at Usagi.

The name of the technique released from the girl’s mouth sounded familiar to Usagi. He tried to ask her about it, but the arrows that attacked him would not allow him to do so.

Each of the arrows had a power that made it a kill, and it was something that could finally be surpassed by using Usagi’s kicks and ears with all his might. But in a situation where arrows of such power were constantly attacking, it seemed like it was only a matter of time before Usagi would get hit.

──But that is only if it was Usagi in the past.

Usagi created a mass of wind in his palm as he swatted away the incoming arrows. Then he slammed it to the ground as hard as he could, and the compressed air exploded, blowing away all of the flying arrows.

Usagi, who finally managed to avoid the arrow attacks, rattled his neck lightly.

([Arrow Cage]… As I recall, it was a superb technique to anticipate all of the opponent’s moves and shoot arrows in advance to attack the opponent from all directions at the same timing? …How can you use it? That technique is the “Archer Saint” technique. Why are you──.)

“Strange. ‘Kicking Saint’, ‘Ear Saint’. You shouldn’t be able to use magic. But you did. Same.” [T/n: she’s indeed talking like this.]

(The same? I’m in the middle of learning from Yuuya. …No, it doesn’t matter. How are you able to use that technique?)

(Huh? What are you talking──.)

“That’s enough. I won’t kill you until I kill Yuuya.”

While making a mass of compressed water and a mass of wind appears in both palms, he tried to slam a kick into the girl with all his might so that she wouldn’t escape, but the sound of something cutting the wind jumped into Usagi’s ears again.

“That’s a shame. I’ve still got a lot of arrows to play with.”

Although the arrows didn’t attack as much as the [Arrow Cage], Usagi couldn’t help but scream against the arrows that attacked to make sure he couldn’t get close to the girl.

(Huh? This girl… how many steps is she predicting?)

Nevertheless, Usagi and the girl’s distance was steadily closing, and it looked like she could close in on Usagi’s attack range in a few more minutes.

”Shocking. This… Can’t be helped. …I can’t escape at this rate. Secret skills.”

Then, a black mist suddenly erupted from the girl’s body.

Usagi had seen that power before. Because that black mist was none other than the power of “Evil”, which was Usagi’s nemesis and other “Holy” bearers, and because of the girl’s use of the power of the “Evil”, Usagi couldn’t understand the existence of the girl anymore.

That’s because the girl, for some reason, wears a sign of “Evil”, and on top of that, she uses the “Archer Sage” technique. The girl generates a black mist and takes a tremendous amount of distance from Usagi.

The girl then disappeared straight into the depths of the forest while Usagi struggled with the arrows. When Usagi managed to finish dealing with the incoming arrow unharmed, he immediately headed towards where the girl disappeared.

Usagi, who didn’t even know which direction the girl was headed in, searched the area for a while, but he had to give up in the end.

(…That little girl, what the hell is she?) 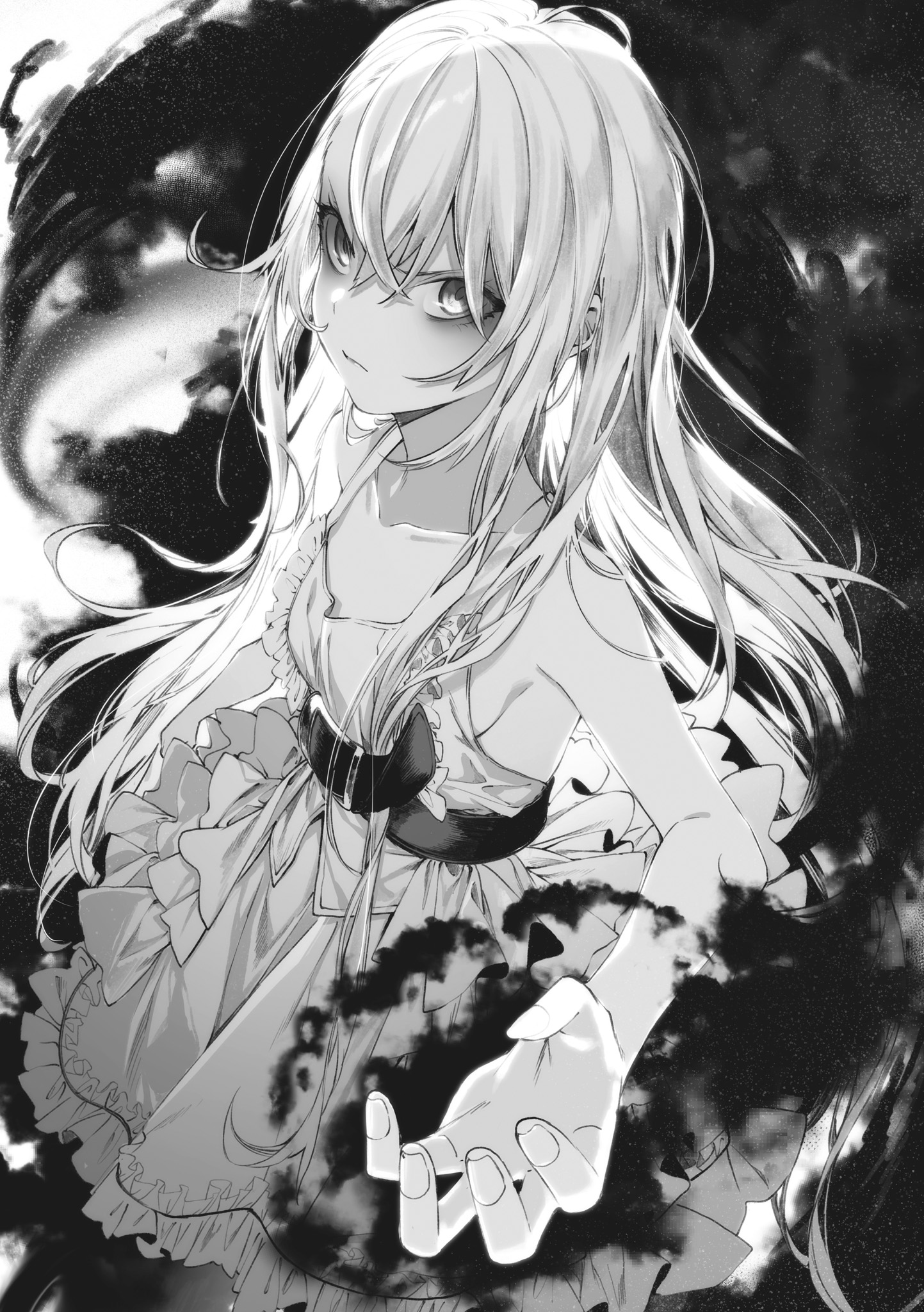 Once he calmed down, Usagi thought about the girl’s identity.

(The technique used by that little girl is definitely the one used by the “Archer Saint” in the past… even the name of the technique should have been the same.)

Although he tried to search for the girl’s identity while sorting through the information little by little, he couldn’t get an answer.

(I haven’t seen “Archer Saint” for several decades now… I guess the quickest thing would be to check with the “Archer Saint” herself, but where is she…)

If the girl is an “Evil”, then there is no reason for her to acquire the “Archer Saint” skill.

Therefore, Usagi’s most mysterious thing is that he was attacked and then invited to a very unacceptable purpose, such as the destruction of the world. Moreover, it was towards Usagi, who was supposed to be the world’s guardian and was bearing the name “Saint”.

(Has the “Archer Saint” gone mad? …No, that’s not possible for that woman… but if it’s any other “Saint”…”Fist Saint” is a possibility…)

Once the idea is conceived, various possibilities come to mind one after another, but in the end, none of them determine the identity of the girl.

──Still, there was one thing that he was understood.

No matter what, that girl has the “Archer Saint” technique and the power of the “Evil” and is about to destroy the world even more. This had to be stopped at all costs. Usagi looked up at the sky and narrowed his eyes.

(…I have to teach Yuuya a little bit about my technique. Even if he’s not a “Saint”, he can still be able to resist any enemy…)

With the appearance of the girl, Usagi decided to reevaluate his training for Yuuya once again. At the same time, Usagi himself, in order to master the new power of magic, began to wander the Great Devil’s Nest in search of a monster to practice magic with again.

22 thoughts on “I Got A Cheat Ability In A Different World, And Become Extraordinary Even In The Real World – Vol 4 Prologue”