“Excuse me. I’m here to invite the opponent of Sword Saint-sama…”

“Invitation. Yuuya, you have been called.”

Because of my lack of response, Yuti looked into my face with concern.

“No, I’m fine. It’s just that I was watching the fight earlier and was surprised that I seemed to be able to handle myself better than I expected…”

“…I understand. Is it the harmful effects of that time? Or a benefit?”

I’m not sure what Yuti was referring to, but I don’t have time to ask. As soon as I tried to follow the attendant, Lexia-san and the others gave me words of support.

“If it’s you, Yuuya-sama, you can definitely win! Please do your best!”

“Go show them what you’re capable of!”

“Hmm. Holy, huh? At best, they can only scratch my foot.”

I don’t know if Ouma-san was cheering me on, but I’m going to do my best so I don’t end up showing disgraceful behavior. I made up my mind and followed the attendant.

“Please wait in this waiting room.”

When I entered the waiting room, I found Master Usagi inside.

When Master Usagi saw me, he smiled.

“Yes, well… or rather, I heard you were headed to the Sword Saint, but what were you doing there?”

(We just exchanged some information and talked about how good you are. That’s good. The Sword Saint will fight you seriously, you know?)

I’m not confident I can last five seconds if the Sword Saint really comes at me, you know?

Master Usagi gave a stern look at the dumbfounded me.

(What are you talking about? If the opponent isn’t serious, it wouldn’t be a training exercise.)

(And also, when you fight, don’t show a poor appearance, okay? If you lose, the quality of me as your master will be questioned.)

“You being unreasonable here!”

Isn’t it impossible for me to win if the Sword Saint is serious? What should I do?

N-no, this is Master Usagi’s way of encouraging me! Yes, that must be it! Let’s just believe that…!

I don’t know how serious the opponent would be, but if I were to ask Master Usagi that, he’d probably tell me to really try and win, so I kept my mouth shut.

I was sweating uncontrollably, and I suddenly realized something.

“C-come to think of it, Master Usagi was here from the beginning, but… did anyone guide you here…?”

“You just do whatever you please, don’t you?”

I had a feeling it was that, but…

I was stunned by Master Usagi’s sense of freedom, but I suddenly decided to ask him about the strange feeling I was experiencing with my eyes.

“Um, Master. Since defeating the Fist Saint, my eyesight has become strangely better. Perhaps I can see faster movement, or perhaps I can absorb the techniques I see…”

Master Usagi made a dubious expression at my words and pondered on his own.

When I tried to call out to Master Usagi, who had started pondering by himself, the attendant came back to call me again.

The attendant who came in tilted his head when he saw Master Usagi in the room, and I hurriedly opened my mouth.

After being sent off by Master Usagi, I moved to the entrance of the arena.

At that time, I have changed my clothes to the [Bloody War Demon Series] so that I can be ready to fight at any time and have everything prepared. However, I took off my helmet so that my face could be seen, as I was about to meet the Sword Saint for the first time.

After waiting for a while, I heard the voice of Orghis-sama.

It seems that he is giving an explanation about the match… I-it’s not good. I’m getting nervous…!

But unfortunately, time does not wait for me, and before long, Orghis-sama’s speech seemed to be over, and I went through the entrance.

Then, I flinched in the face of the cheers that went up all at once. I-I can’t believe the crowd is this huge…!

When I was in the audience, I didn’t particularly care about the number of people watching, probably because I had a strong sense that I was part of the audience, but when I stood in front of them all, the cheers were so overwhelming that I almost backed away.

But there was no way I would run away, so I put a lot of pressure on my stomach and managed to hold my ground.

“───So you are the Usagi’s apprentice, huh?”

A woman’s voice reached my ears as the crowd cheered loudly. As I turned my gaze towards the voice, a woman came through the entrance on the opposite side of the arena from me, her eyes still closed.

The woman had an elegant presence that seemed out of place with the arena, and I could have been convinced that she was a noblewoman. However, the sword on her hip and the woman’s overwhelming presence made me understand that the woman in front of me was my opponent, the Sword Saint.

Eeeeehh? N-no way! I’ve heard that she is the strongest of the Holy, so I thought she would be more stern and scary, but she’s not at all what I imagined!

The woman in front of me─Iris-san slowly opened her eyes and then froze in surprise when she saw my face.

When I asked her about her unexpected reaction, she suddenly put her hands on her cheeks and suddenly crouched down. 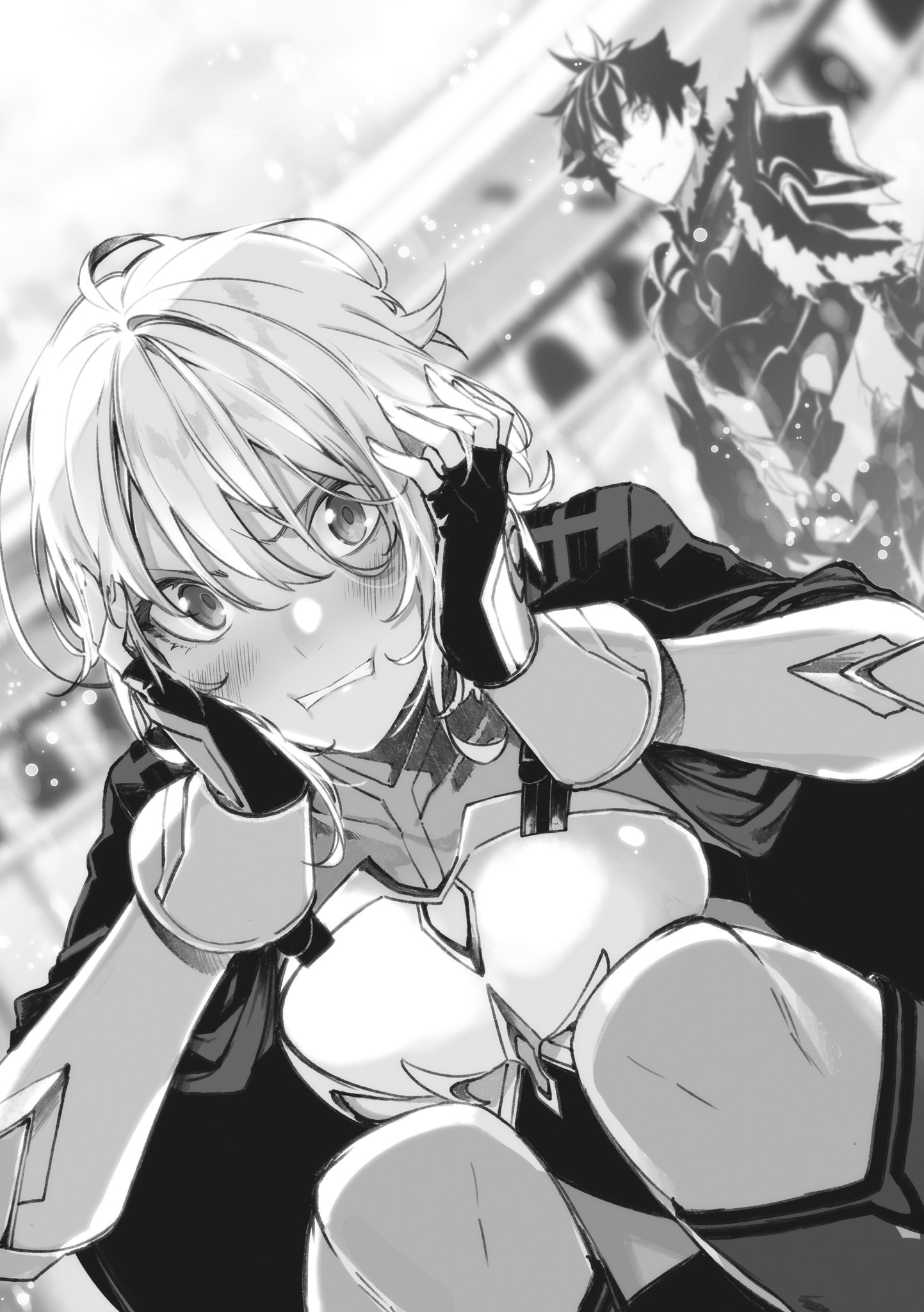 “W-what’s this feeling in my chest…? C-could it be that… this is love?”

“Ah? It’s nothing. I’m only interested in men who are stronger than me.”

What the heck is she talking about…?

Iris-san then cleared her throat as I was trying to figure out what was going on.

“Ah, I’m the disciple of the Kicking Saint, Yuuya Tenjou.”

“Kuh! There’s about a ten-year age difference… N-no! It’s not uncommon for people to have an age difference these days! I mean, it’s something to be envied!”

As I shivered involuntarily, Iris-san, who had been strangely excited a moment ago, suddenly gave me a sharp look.

“Well, but… if you don’t have the ability, we can’t talk about it.”

I took out my [Omni-Sword] and held it up quietly.

At the end of Iris-san’s words, the signal to start the fight was finally given, and I stepped in with all my might and slashed at Iris-san.

“You will never reach me with that.”

My attack was deflected with a clear metallic sound before it could reach Iris-san! However, as I did so, I noticed that Iris-san’s arm had momentarily blurred.

“Don’t tell me… you swung your sword in that instant?”

“Huh? You can see it clearly, huh. It usually ends up that no one can recognize it…”

Seeing Iris-san smiling amusingly, I can not stop my cold sweat.

No, no, isn’t that too outrageous? What should I do against a sword that was swung at an almost unrecognizable speed? Moreover, looking at Iris-san now, her sword is properly sheathed. It’s not a move that can be done in an instant.

Then, Iris-san smiled provocatively at the stunned me.

“By any chance, you’re not going to say that this is the end, are you?”

Of course, I wouldn’t say that this was the end, but it was definitely my best effort. But Iris-san easily blocked the attack. What’s more, it’s not as if it’s been enhanced by any particular magic.

…I already knew that, but the difference is so great that I can only smile bitterly.

Looking at me like that, Iris-san made a suspicious expression on her face.

It was obvious to me that my power would not work. Then I had to do what I could.

When I ran forward again, I put away my [Omni-Sword] and took out my [Absolute Spear] from my [Item Box].

Aiming at Iris-san, who tilted her head, I threw the [Aboslute spear] in all seriousness. However, with a clear metallic sound again, the spear was easily repelled.

“What do you think you’re doing… such an attack───.”

Immediately after I threw the [Absolute Spear], I already had a new weapon in my hand; it was the [Formless Bow ], and then I shot several invisible arrows.

Iris-san didn’t seem to understand what I was doing for a moment, but it seems that she sensed the invisible arrows I shot, and a metallic sound rang out again, and all of my arrows were flicked off.

“…I’m surprised. My sword can be slashed at a speed that can’t be tracked by the eyes, but I didn’t think it would really be an invisible arrow───.”

It seemed that Iris-san was talking about something, but in order for me to fight Iris-san properly, I could not give Iris-san the time to attack me; I had to attack her one-sidedly with a saturated attack, so I continued to attack her relentlessly.

Even so, my attacks were still handled by her sword with a speed that couldn’t be followed by the eyes. Then I launched the [Absolute Spear] at Iris-san again, which had just returned to me, with a kick that was directly taught by Master Usagi.

Iris-san rolled her eyes when she saw the powerful spear that suddenly entered the uninterrupted barrage of arrows.

The [Absolute Spear], which was more powerful than the one I threw at her a few moments ago, couldn’t be easily deflected by Iris-san. It’s the first time I’ve seen her take it seriously with her sword since the mock battle began.

Iris-san was still able to block the [Absolute Spear]… but I was waiting for that momentary gap in her defense.

“Huh? Wait… That big hammer of yours, it looks like it’s something dangerous.”

Yes, I was preparing to attack with my [World Strike].

Unlike other weapons, this weapon has a large gap, so it is difficult to hit. However, if I could hit it, it would be powerful enough to defeat any opponent. After all, it carries mass equal to that of the world in the attack.

In addition, in order to increase the certainty, I also deploy the [Magic Attire] for the first time here. Then, a pale blue light gushed out of my body and burst like a bolt of lightning.

Iris-san’s eyes widened at the sight of me.

15 thoughts on “I Got A Cheat Ability In A Different World, And Become Extraordinary Even In The Real World – Vol 6 Chapter 5 Part 3”