Chapter 4 – I Witnessed An Unexpected Side of Milia

It was three days later, on the night of June 14th, that we finished all the preparations for our journey.

“Good work, Kou. Our departure is in two days, so let’s take it easy tomorrow.”

“Agreed. I think I can sleep until noon for the first time in a while.”

“We’ll see each other again on the day of departure. Well, good night.”

After I dropped Iris off at home, I returned to the… Quiet Moon Pavilion.

It was a little past ten o’clock in the evening.

As I walked by the front desk, I was stopped by a male employee.

“You must be Kou Kousaka-sama, correct? You have received a letter from Relic Di Hubert-sama. I’ve put it in the doorpost of your room, so please check it.”

Relic is the third son of a duke family, a slender young man with a scholarly appearance.

We became acquainted when I discovered the underground city of an ancient civilization, and we’ve been good friends ever since.

Currently, Relic is not in Aunen.

He should be on his way to the city of Millard… where the mansion of Count Millard, the lord who rules this region, is located.

I opened the letter from Relic in my room, thinking about that.

The writing was polite and easy to read, giving me a good sense of his personality.

It seems that the lord, Count Millard, is staying in the northeastern city of Surier to recuperate. I’m curious about his condition, so I’m going to visit him.

On a different subject, I heard that Kou-san is going to receive an award in the royal capital! Congratulations! I’m planning to attend the ceremony, so I’ll see you there!

The casual text was devoid of nobility, but considering Relic’s character, it was understandable.

It was one of the towns where Iris and I would be stopping on our journey starting the day after tomorrow. It is famous for its hot springs, and we plan to spend two nights and three days touring the hot springs.

“Maybe we can meet Relic there.”

With that thought in mind, I put the letter in my [Item Box].

After taking a shower and lying down on the bed, sleepiness came quickly.

The past few days had been busy with preparations for the journey, but now that it was over, perhaps my thread of tension had been broken.

The next day, I woke up to the voice of [Full Assist].

The system rewrite has been completed.

The individual named “Surara” will be able to leave the underground city.

Please specify the place and time where you plan to meet up.

It seems that the system has been rewritten.

My modern Japanese senses tell me that this kind of work is bound to have errors, but there has been no trouble or delay. It’s a wonderful story. My previous workplace should learn from this.

I let out a small yawn and raised myself up from the bed.

In front of me was a pale blue window with a map of the area around Aunen.

“Do I use this to specify the meeting point?”

I thought as I looked at the map.

The road from Aunen to Toue heads a little to the southeast at first and then curves sharply to the northeast.

You can imagine it as the letter “J” tilted slightly to the right.

At the bottom of the large southeast curve, it skirts the Cello Forest, which is not far from the entrance to the underground city. It would be the perfect place to meet up with Surara.

I reached for the window map and touched the bottom edge of the curve.

Immediately after that, I hear a voice in my mind saying, “Do you want to use this as the meeting point?” I nodded my head slightly.

With a slight nod, the map window disappeared, and a new window appeared.

There was a dial clock on it.

“I guess the next step is to specify the meeting time.”

The clock’s operation was similar to setting a timer on a smartphone. I scrolled the numbers around with my finger and set it for tomorrow afternoon.

Okay, I guess that’s it.

I took a deep breath and lay down in bed again ─ before I knew it, I had fallen asleep again.

The next time I woke up was in the early afternoon.

After leaving the Quiet Moon Pavilion, I finished my meal outside and went for a walk.

As I walked leisurely through the city, I came to a place called Bookstore Street. As the name suggests, there are many bookstores lined up on both sides of the street.

The image of a fantasy world is that of the Middle Ages, but the civilization of this world has achieved its own development through magic technology, and printing technology has already become commonplace.

“Since I’m here, I might as well go shopping.”

I’m going on a journey tomorrow, and I don’t have a single tourist guide. This would be a big problem.

I skimmed through it and bought something that looked good.

In addition, I bought five novels. I’ll read them during the carriage ride.

It’s hard to carry around all the books I’ve bought, but I have an [Item Box]. If I store them here, they weigh practically nothing and don’t take up much space. It’s great.

Just as I was leaving the bookstore with a smile on my face, a woman crossed the street in front of me.

She was carrying a large paper bag as she staggered down the street. She was dressed in a white blouse, and a navy blue flared skirt. It was simple but elegant.

Her fluffy chestnut-colored hair is arranged in a braid… Huh?

I’ve seen her face before.

I’m not sure if I should call out to her or not, but the woman who looked like Milia let out a small scream.

It seems that she stumbled on the ground, and her body stumbled forward.

The woman managed to stay on her feet, but because her center of gravity was shifted forward, the paper bag ripped open in a big way, and the many books that were stuffed inside it fell out all over the place.

Of course, I wasn’t going to let it go.

I selected the Fenrir Coat from my [Item Box] and immediately activated the《God Speed Blessing EX》.

I ran through the slow-motion world and caught the books that spilled out of the paper bag.

Twelve books in total, quite a few.

I’ll put them in the [Item Box] for now.

When I’m done, I turn to the woman. The somewhat young and cute face was definitely Milia herself.

The time that has passed up to this point is about two seconds, and I cancel the《God Speed Blessing EX》. 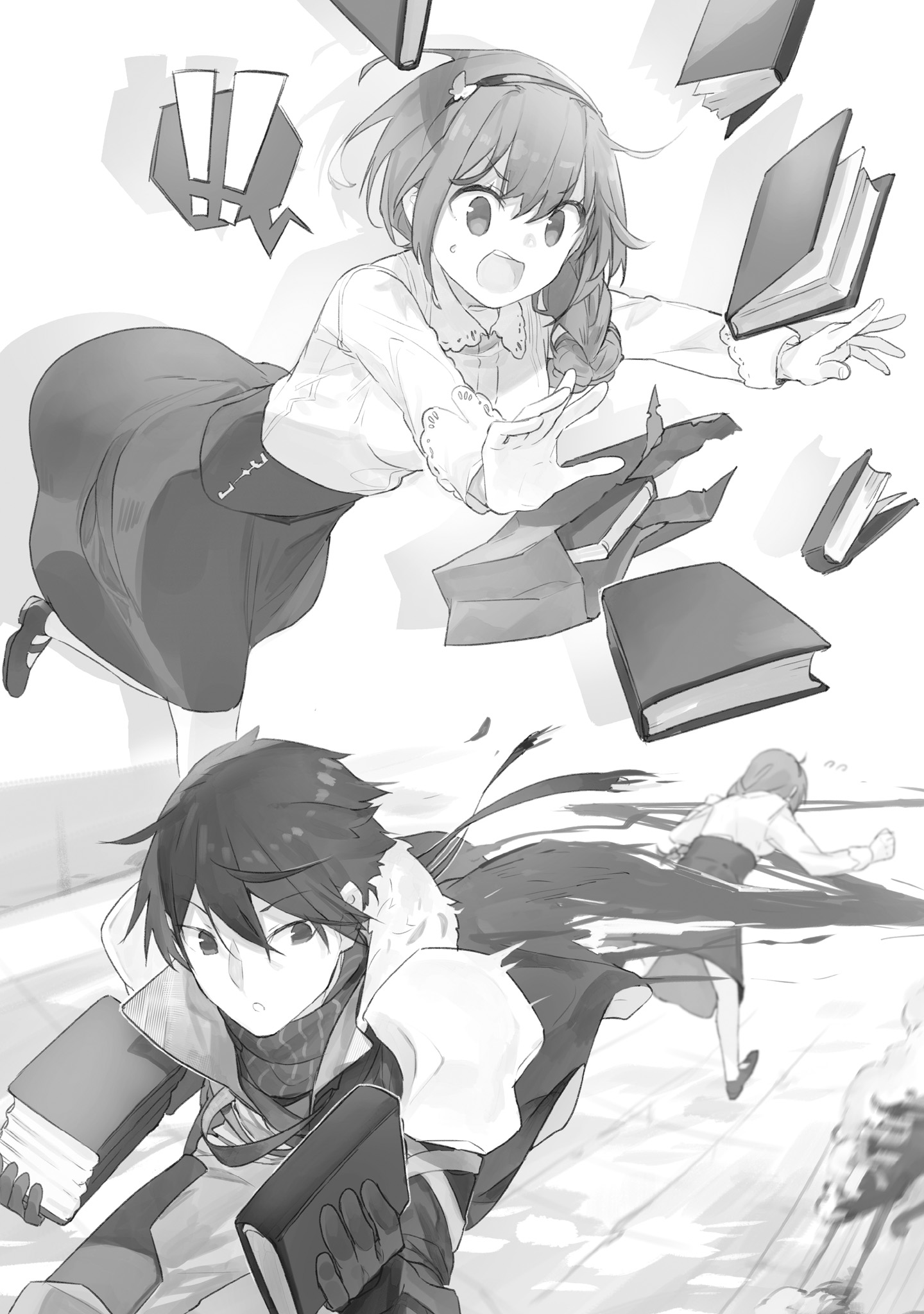 “Y-yes. I just stumbled over… Huh?

Milia scurried around to look at her feet.

“Kou-san, have you seen my books? I dropped about ten of them…”

“Sorry. There were quite a few of them, so I had them collected in my [Item Box].”

“I see, thank you very much. ──Wait, eeeehh!? I couldn’t see it at all. That was very fast work…!”

The top half of Milia’s paper bag was torn, but there were still about ten books that needed to be carried.

They were all large and thick. It seemed to be difficult to carry them.

“I’ve got the [Item Box] over here, so leave it to me to carry your stuff. And Milia has always taken care of me, after all.”

I nodded and took the paper bag from Milia and stored it in my [Item Box].

Including the ones I caught earlier, that brings the total to twenty-four books.

I heard that Milia’s house is located a little far from here, so I decided to go with her there.

We left the bookstore street and walked down a relatively narrow street together.

“I’m sorry to have caused you trouble. Thank you, Kou-san.”

“No problem. But you bought a lot of books.”

“I love books. It was my day off, so I went around Bookstore Street, but I bought so many books that I ended up in a big mess…”

I can’t help but understand that feeling. When I was a student, I was a gamer, but I also read a lot of novels and manga.

As a result of impulse purchases at bookstores, I’ve had countless times when I’ve had trouble carrying them around.

“Could it be that Milia is a bookworm?”

“Hmm, I’m not sure about that. There are many books that I have bought but are still piled up, and the God of Books would be angry with me if I called myself a bookworm.”

She seems to be a real bookworm in her modesty, doesn’t she?

However, Milia has an image of being very active, so the fact that she likes books is a little surprising.

I guess people are not always what they look like.

After walking for about fifteen minutes, we soon came to an upscale residential area in the southwest part of the city.

The surrounding area was lined with large houses.

Milia’s house was in the center of it, a two-story house with a garden.

“When you become a branch manager or assistant branch manager, the guild provides you with a place to live, but it’s too big for one person to live in. It’s obviously designed for a family of three or four.”

She opened the door and entered the house.

“Where should I put the books?”

“There’s a shoebox on the right; just put them on top of that.”

I took out the books from my [Item Box], divided them into several piles, and placed them on top of the shoe box.

“Yes, it’s perfect! Thank you very much, Kou-san, for bringing them here.”

Milia bowed on the spot.

“I want to thank you for all the trouble I caused you. What would you like?”

“You don’t have to worry about that. You’ve been a great help to me, so I’m just returning the favor.”

“I’m really sorry about this…”

“Well, I guess you owe me this one. You’re coming to the award ceremony, right? You can return the favor to me when we meet in the royal capital. You can tell me what restaurants are recommended, or take me to tourist spots. I’ll leave it to your taste.”

I felt Milia’s eyes light up as if they were… glowing.

“I understand. Then I’ll think of a way to return the favor with all my might. Fufu, instead of regretting… to have given me time to prepare, look forward to the next time we meet!”

I don’t know what it is, but I can feel the great spirit.

Either way, things are going to be interesting in the royal capital.