Bonus chapter!! Want to support me? You can subscribe to my Patreon and read up to 4 chapters for each novel.
Enjoy the chapter~

The next day after I helped work as a model. I went home and regretted that I should have bought something like home appliances other than daily necessities.

Anyhow, my TV at home can’t be used anymore. It’s not digital, but an analog TV. I don’t subscribe to the newspaper, so I wouldn’t know the latest news without watching TV. There are also some other home appliances that have already worn out with age.

Even while complaining, I still went to school, I don’t want to be a useless person anyway. But still, it makes me depressed to think that I should attend school for another week from today, but when I left home, suddenly someone called me.

I turned toward the voice, apparently, it was my younger brother, Tenjou Youta, and his twin sister Tenjou Sora, staring at me.

… Uwaa, I’ve met someone that I don’t want to see. No, I thought we’d see each other eventually, but you don’t have to come now, you know…

Even though I was reluctant, but I ask them just in case.

“What, you said? Your behavior is really like that useless big brother of mine.”

I don’t know why he said something like that. I was really confused, and then Sora opened her mouth as if looked down on me.

“Recently, a friend of ours was talking about it. My big brother has become super handsome. Anyway, I told them it was just a rumor, but they were so persistent, thus we came here to check it.”

Rumor? Eh, are people talking about me?

“Because of that, we’ve come to check it… you, shitty big brother… What the hell did you do?”

These two not only made fun of me but also to grandfather. I… don’t want to tell about grandpa’s things to them. Thinking so, I calmed myself, but they start to talk again, still looking down on me.

“Hmm. After all, you did plastic surgery, right? I can’t believe that to think you changed your face with plastic surgery. It’s just a fake change, after all. So, where did you get the money from? Or did you sell your house? Hahahaha!”

But, you see, it wasn’t plastic surgery… Nevertheless, maybe my body has completely changed from the genetic structure, somehow my instinct told me that. Youta said that plastic surgery is just a fake change, but that’s people’s effort who are trying to be a little beautiful, at least they’re trying instead of just giving up.

That Youta, he’s denying it, and making fun of it. Are there a lot of people who think like Youta? If so… that’s so sad. But, I really thought that, and I could feel that when you want to polish yourself up to get better.

We were arguing in public, so the people around us were watching with great interest. It’s embarrassing…

“Whatever. Either way, there’s a part of you, shitty brother, that can’t win against us.”

“Yeah. You’re an idiot, and even if you think about the future, you don’t have a future anyway.”

“You can’t study, you’re also bad at sport… After all, you’re an inferior being!”

They completely made fun of me, and I wasn’t able to retort because everything they said was true, I could do nothing but be silent. Thereupon, the curious students who were just silently watching at our dispute until now suddenly became noisy.

Youta and Sora also noticed the commotion, they’re tilted their heads out of curiosity, and suddenly a limousine stopped near us.

A long limousin that is usually driven by those rich people came out of all of a sudden. The three of us were lost for words looking at it, and then, the limousine’s door opened, and then two women appeared from inside. One is a very beautiful woman dressed in butler clothes, and the other is ──.

I feel like I had heard her voice somewhere.

She’s dressed in a blazer-type uniform based on white, and how should I say it, a straight, glossy black hair? Stretched to her waist. She has somehow an overwhelming aura that is different from the ordinary people, she reminds me of words of sweet flower and a woman who displayed the feminine virtues of old Japan.

And I was… I was captivated.

She’s a very beautiful girl, and also, her beauty is different from the model, Miwa-san. As well as her appearance, I was completely captivated by her clear eyes and soft atmosphere that stared straight at me.

… Anyway, which uniform is that?

As I was absent-minded unintentionally, Youta suddenly shouted gave me back my consciousness.

I’ve heard that name before, it was the name of a famous high school, and after graduation, you can go on to “Ousei University” without having to pass the entrance exam.

It’s a high school where you can quickly become an elite, to a world completely different from us. Let alone study, there’s a lot of people who enrolled in that school to play an active role in every field, and the school graduates to take the position as a top-level in each field. It’s a high school that can be said will secure your future. So everyone aimed and dreamed of being enrolled in that school. 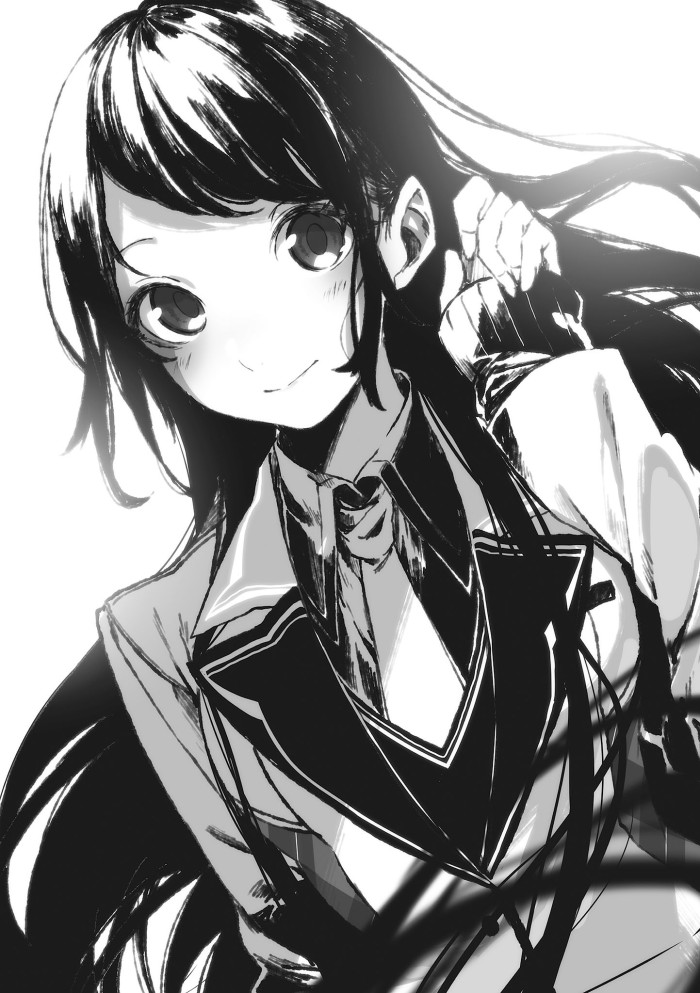 … Well, since it was such a school, you will understand if you think for a moment, it’s not a school for an ordinary person to enter. And so, why a student from such school to be in a place like this…? The girl in front of me laughed elegantly as if that thought were described in my expression.

“Fufu. Don’t you remember? I used to be involved with a group of a man at a convenience store…”

I remembered. Sure, I’ve helped a girl from a group of men before… I mean, I was fully beaten instead. At the time, I wasn’t used to talking to girls so much that I couldn’t even see her face…

“Did you just remember it?”

“In order to thank Yuuya-san, I’ve investigated various things while thinking that it was my impoliteness.”

Investigation… what did she investigate? Well, I don’t think there’s much information that can be investigated. The girl tilted her head as if curious about something when I was concerned about what was being investigated.

“Even so… Yuuya-san, did you lost your weight?”

I think that it was a change that wasn’t so obvious, but looking at the reaction of the girl in front of me, maybe, it seems my transformation is really visible. No, it seems really is.

When I was completely confused, the woman in butler’s clothes quietly informs the girl.

“Milady. Let’s put aside the introduction first and proceed to the main subject…”

With an expression that’s like remembered something, the girl opened her mouth and saying a ridiculous thing with a smile.

42 thoughts on “I Got A Cheat Ability In A Different World, And Become Extraordinary Even In The Real World – Vol 1 Chapter 4 Part 5”