(I’m not going to surrender!)

(Then you can die here!)

As soon as Merl-san said that, the Dragonias attacked at once. In the midst of this, Merl-san shouted while operating her terminal.

(I apologize, everyone! It seems that the Dragonias calculated the warp release point and ambushed us…! I’ve deployed the shields, but brace for impact just in case!)

Merl-san operated a holographic touch panel that appeared and disappeared again at great speed. Then, it seemed that a shield had enveloped the spaceship, and a blue film covered the outside of the window.

As we continued to look out the window, we saw several Dragonia spaceships approaching.

“They look like the dragons of our world, don’t they?”

I was surprised to see how calm Odis-san, Ruri, and Rill were, even though we were under attack.

“Well, it won’t change the situation that we’re being attacked even if I make a fuss here. But the number of enemies is less than I expected…”

As Odis-san said, although we were ambushed, there were only about five Dragonia spaceships in the area that we could confirm. Could it be that the main force was somewhere else…?

However, the fact remained that we were only one ship.

“Merl-san, what kind of weapons does this ship have…?”

(Although there is one installed, it is impossible to deal with that number of ships… and the enemy ships are designed for space combat, while this ship is designed for transportation, so it will be very difficult to fight a full-scale battle…)

In other words, if we don’t escape from this bunch of spaceships, we’re going to be shot down right here.

As I was thinking about what to do, the Dragonia spaceship fired an energy cannon at us, indicating that there was no time for us to think about it!

While the spaceship was moving so fast that it almost flipped me over, everyone except me remained calm and composed. T-they’re amazing…

Then, Master Usagi, who watched the enemy attack, asked Merl-san, who was frantically operating the spaceship.

(Hey, Merl. Our bodies can adapt to outer space thanks to that protective fluid you just gave us, is that correct?)

(If that’s the case, we’ll go outside the ship and fight them off.)

I was surprised by the unexpected words… but it’s true that even if we’re on the spaceship, we could only escape, so it’s better for us to intercept them directly… huh? We’re dealing with spaceships, you know?

Right, I was also dealing with a spaceship when we were attacked by Drade, but this is in space. The situation was different from that time.

“Right… that seems to be the only way, but it’s also dangerous to go outside in this situation.”

As Iris-san said, the spaceship we were on was exposed to a storm of bombardments, and the ship was not flying in a stable state, probably because of the many complicated evasive maneuvers.

If we jumped out of the spaceship in such a state, we would be blown away.

As I was thinking about this, Odis-san nodded his head.

“Fumu… then I’ll take care of their attack for a while.”

“As expected of Master! You’ll do it!”

Ruri and Rill nodded reluctantly and immediately moved next to Odis-san, holding out their weapons.

As magic circles emerged from the palms of their hands, the two circles overlapped and became one.

The moment they chanted that, the bombardment from the Dragonia aliens was intercepted by the magic circle that suddenly appeared, preventing them from hitting the shield that surrounded our spaceship.

“Whoa! It’s more powerful than I thought, isn’t it?”

However, the attack of the Dragonia aliens seemed to be powerful, and the two with their arms over their heads were grimacing.

“I see… Ruri and Rill’s [Magic Barrier] is also quite tough… Then… [Magic Bullet].”

As Odis-san waved his finger lightly, a mass of light appeared outside the window.

It’s a pure mass of magic power without any attributes. The size of the mass itself was about the size of a basketball, but just by looking at it, it was clear that it contained a terrific amount of magic power.

And there was more than one mass of magic power.

Every time Odis-san waved his finger, the mass of magic power increased in number, and before long, there were dozens of these masses floating around the spaceship.

In the midst of this, the Dragonias continued their bombardment without resting their attack.

At that moment, Odis-san said briefly, and the mass of magic power floating around the spaceship started to shoot down the bombardment from the Dragonias’ spaceship with precision!

While everyone was amazed at how delicate the control was and how powerful it was, Odis-san turned to us.

“Now is the time to get out. I’ve managed to neutralize them for now, but I don’t know how long that will last.”

Then it seemed that Night and Ciel would follow us, so the two of them, me, Yuti, Iris-san, and Master Usagi, immediately went outside the spaceship.

Ouma-san was asleep in the ship, completely unfazed by the situation, and Akatsuki, not exactly suited for fighting, was quietly staying in the spaceship.

When I went outside, I was a little puzzled by the strange sensation that was different from being on Earth, although this would be natural.

Thanks to that protective fluid, we were able to move around in space without any problems, but what would space be like without it? Would it be cold? Hot? And was there no wind in the vacuum?

Yuti and the others were all looking down at their bodies.

“Strange. There’s nothing unusual about it, but it’s very uncomfortable.”

“Right…. a strange feeling that’s hard to describe as comfortable.”

Night and Ciel were adjusting their fur and feathers and checking their bodies.

In the meantime, Odis-san, Ruri, and Rill are using magic from inside the ship to deal with the attack of the Dragonia aliens.

Then, suddenly, a voice sounded in our minds.

“Each of you seems to be doing fine. I’m also curious about what space is like, but… you should finish this as soon as possible. As I said before, don’t expect us to be able to handle it forever.”

The voice was that of Odis-san, which surprised us all.

“Is that magic too?”

“Yes, it is. I can see what’s going on outside with the equipment in the spaceship and my magic to some extent. So don’t worry about stray bullets, just fight.”

With Master Usagi’s signal, everyone took off at once using the spaceship as the foothold.

The first step was to use the spaceship as a foothold, so we were able to proceed without any problems, but the speed was still not good.

So, I quickly added some wind magic to propel me forward.

It’s not the same as a [Magic Armor], but it’s very fast.

I wonder if this can be crossed with the lightning attribute of the [Magic Armor]? I’m not sure if I can control it if I try it suddenly, but I think it’s worth a try. It might be a good idea to practice it after we settle things down.

While I was thinking about this, Iris-san, Master Usagi, and Night also used their own methods to get to the Dragonia spaceship.

Iris-san is running through space, using the earth attribute magic to create footholds, while Night and Master Usagi use wind magic on their feet to create a foothold in space and move forward at great speed.

Ciel didn’t seem to be using any particular magic, but he was just flapping his wings and going very fast as usual. I wonder how…?

When we almost reached the Dragonia spaceships, the enemy seemed to have noticed us, and several energy cannons were pointed at us.

“Mm. I’m sorry, but we’re too busy defending the spaceship. You’ll have to take care of any attacks coming your way.”

“Prediction. No problem. I’ll shoot them down for you.”

And then, Yuti, who was the only one left standing on Merl-san’s spaceship, took up her bow and fired an arrow against the bombardment that was being fired at us. 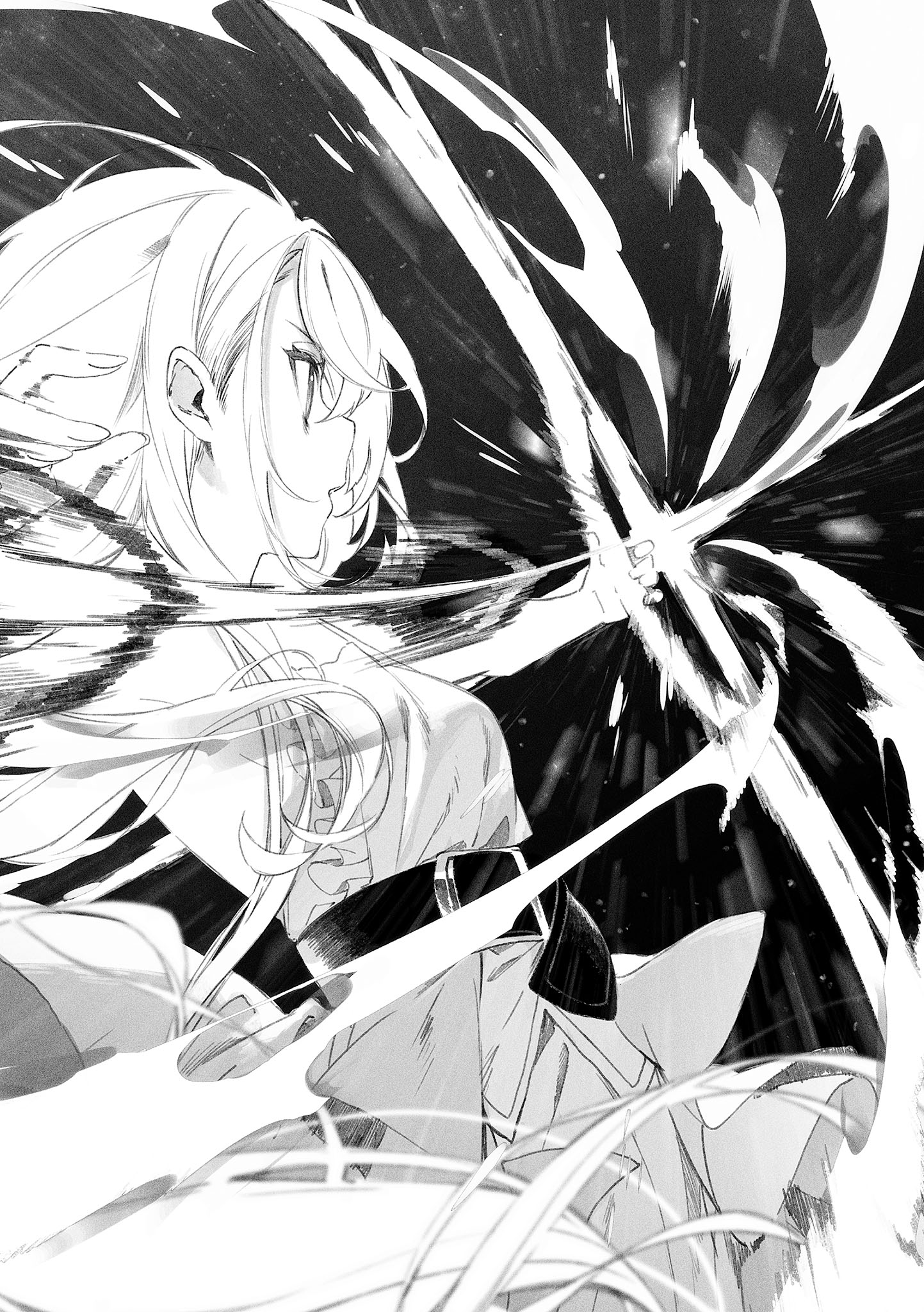 It was a terrifying series of powerful single-arrow shots called [Death Comet], which were used when the Dragonia aliens had attacked before.

The arrows released at a furious pace were sure to pierce through the Dragonia aliens’ bombardment and damage the spaceship itself.

(Hmph… As expected of a disciple of the “Bow Saint.” Iris and I won’t lose either, but… Yuuya, you should do your best too. If you show a disappointing performance, I’ll give you even more severe training than before.)

I was happy to see Yuti’s growth, but as a result, I had to work hard too.

In the meantime, when we finally reached the Dragonia spaceship, Iris-san made the first move.

The slash that was released from below, as if cutting up, accurately slashed through the part of the Dragonia spaceship that looked like an exhaust port on a car.

In the same way, Master Usagi also dexterously used magic to create a foothold and instantly approached the spaceship, and then kicked through the ship’s hull, creating a huge hole.

It was the first time I had seen the two of them perform such a feat, but they were all so powerful that they could easily destroy a ship several dozen meters in length.

Night rushed in while deploying his [Magic Armor] and pierced the ship’s hull with his body!

I don’t know why… but I feel like Night is more energetic or stronger than usual… Is it only my imagination?

With the usual blue flames on his body, Ciel flew right on top of the Dragonian spaceship and plummeted straight down, piercing its hull.

As everyone destroyed the Dragonia spaceships one by one, I also took out my [World Strike] from the item box to deal with the spaceship in front of me.

It is possible to destroy the spaceship with Sage-san’s weapons, such as the [Omni-Sword] and [Absolute Spear], but I chose to use the [World Strike] in order to deal with it without fail.

Besides, since I was dealing with a big target like a spaceship, the [World Strike] would be a good choice.

At that moment, the spaceship created a shield just like the one on Merl-san’s spaceship for a split second, but the [World Strike] easily shattered it all and left it in pieces.

Iris-san and Master Usagi widened their eyes as they witnessed the power of the [World Strike] for the first time.

“T-that’s what you were using when you were fighting me before, but it’s such a terrible thing!”

(That spaceship was destroyed like a piece of wood… I guess it’s one of the Sage’s weapons, but that’s outrageous…)

So, in the end, I relied on the performance of my weapon, but you’d have to forgive me for that…

When I was feeling that way, I heard Odis-san’s voice in my mind again.

“I saw something outrageous… but that’s okay. I’d like to hear more about it, but Merl-dono tells you all to come back here right now. We’re going to move out from here.”

As per Odis-san’s words, we immediately returned to Merl-san’s spaceship, and Merl-san took control of the spaceship and immediately left the area.

2 thoughts on “I Got A Cheat Ability In A Different World, And Become Extraordinary Even In The Real World – Vol 9 Chapter 3 Part 2”