We eat mandarin oranges under a kotatsu. The sweet and sour mandarin oranges add to the warmth of the kotatsu, which is the best way to experience winter in Japan. [T/n: Kotatsu = A heated table in a Japanese-style room.]

Antia gave me a lap pillow, peeled me a tangerine, and fed it to me. What a happy time.

When I raised my head, I could feel Antia moving, and my other wife sat down. I’m blind right now due to the demerit of the [God’s Supper]. That’s why my wives are taking care of me wonderfully. Well, I guess there are many people who say it’s excessive, but who would hesitate to ask their wife to give them a lap pillow!

Who’s going to give me the lap pillow this time? Canaan? Or is it Hannah? I gently lay my head on her lap. Yes, it feels good to feel the soft, plump sensation on my head. I couldn’t help but rub my cheek on her thigh.

The voice from over my head was… Ichinose?

Why is Ichinose giving me a lap pillow!

“Tsukuru-san, is it about time for you to officially take Suzuno-san and me as your wife?”

Yes, I know, Allie had come to me to be my wife. But that’s not the case with Ichinose, is it?

“I’m afraid that you’re mistaken, but Suzuno-san is here because she wants to be your wife, too, you know?”

“It shouldn’t be that surprising, right? Being around Tsukuru-san means you’re in danger. She must know that she’s in such a dangerous place, and it’s not just because she’s your childhood friend, isn’t that right?”

Allie is right… I thought I knew that too, but maybe I was trying not to think about it.

“Tsukuru-kun, I want us to be more than just childhood friends. Is that no good?”

Being summoned to a different world seems to have completely changed my constitution to a riajuu. But Ichinose being my wife… Since we were childhood friends, I tried not to be conscious of it, but I think I like Ichinose.

Otherwise, I wouldn’t have been able to keep up with Ichinose for so long. There were other people in high school that I knew from before I went to elementary school, but we weren’t that close.

I should face Ichinose with an honest heart, too!

But what about Allie? I met Allie for the first time when I came out of the Great Borf Forest, so it hasn’t been that long. Even so, I still like Allie for her amiability and intelligence. Whether it’s because I like her as a person or as a friend, I’m not sure… Wait, am I her friend? Huh, I’ve never had a friend.

As long as I liked Ichinose, I don’t have any friends… It’s a lonely life…

No, I’m not lonely! I have Ichinose and Canaan, Hannah, Antia, and Sanya!

“…I get it. I shall take Ichinose and Allie as my wives! No, I want you to be my wives!”

I can’t see their faces because I’m blind, but will they forgive me?

Canaan is a good, honest girl.

“If they are the people that Master has chosen to be his wives, Hannah has nothing to complain about. Allie-sama, Suzuno-san, please take care of me, too.”

Hannah’s so stiff. But that’s what I like about her.

“Ufufufu, I didn’t expect Tsukuru’s amount of wives to end with just three people, after all, so I’m fine with it.”

What does Antia think I am?

“Thanks to the three of you.”

“I’m sure whoever onii-chan chooses is a good person, so that’s fine.”

Sanya has inherited a little bit of stiffness since she’s Hannah’s sister, after all. But thanks to Sanya for trusting me, and let’s hope she doesn’t just become a little sister-in-law for them.

Twenty-three hours and fifty-five minutes have passed, and my vision has been restored. It was somewhat embarrassing to see my two new wives now that I could see them again. It’s the same for Ichinose, whose cheeks are red and looking down and trying not to make eye contact with me.

I never thought I would be staring at Ichinose like this, but Ichinose’s fidgeting appearance is fresh and endearing.

“Tsukuru-san, are your eyes okay now?”

“No problem. The disadvantage of the [God’s Supper] will run out in exactly twenty-three hours and fifty-five minutes.

I’m so thrilled when Allie’s slit eyes look up at me and tell me she’s going to give me a lap pillow. It’s very destructive.

Everyone’s eyes are focused on me, making it impossible for me to respond poorly.

“Master, Canaan would like to give you a lap pillow too!”

“Tsu-Tsukuru-kun, if you want me to give you a lap pillow, I will do it…”

N-not good! I’m going to get a nose bleed!

I used [God’s Supper] and [Equivalent Exchange] to turn him back to the original Kurogiri, but this guy has turned back into a human (the human race)…

No, the strange thing is that he can take the form of both a human and a katana. Kurogiri, in human form, was a dandy old man of about forty years of age, a bit of a wicked old man’s style, and unlike the image of Kurogiri, he had blond hair and blue eyes.

The thin, macho, shaven off Kurogiri was about 185 centimeters tall, making me look up at him with a bit of envy. He’s excited that, thanks to his human form, he can practice swordsmanship with me, but I’m dissatisfied with the tall Kurogiri! 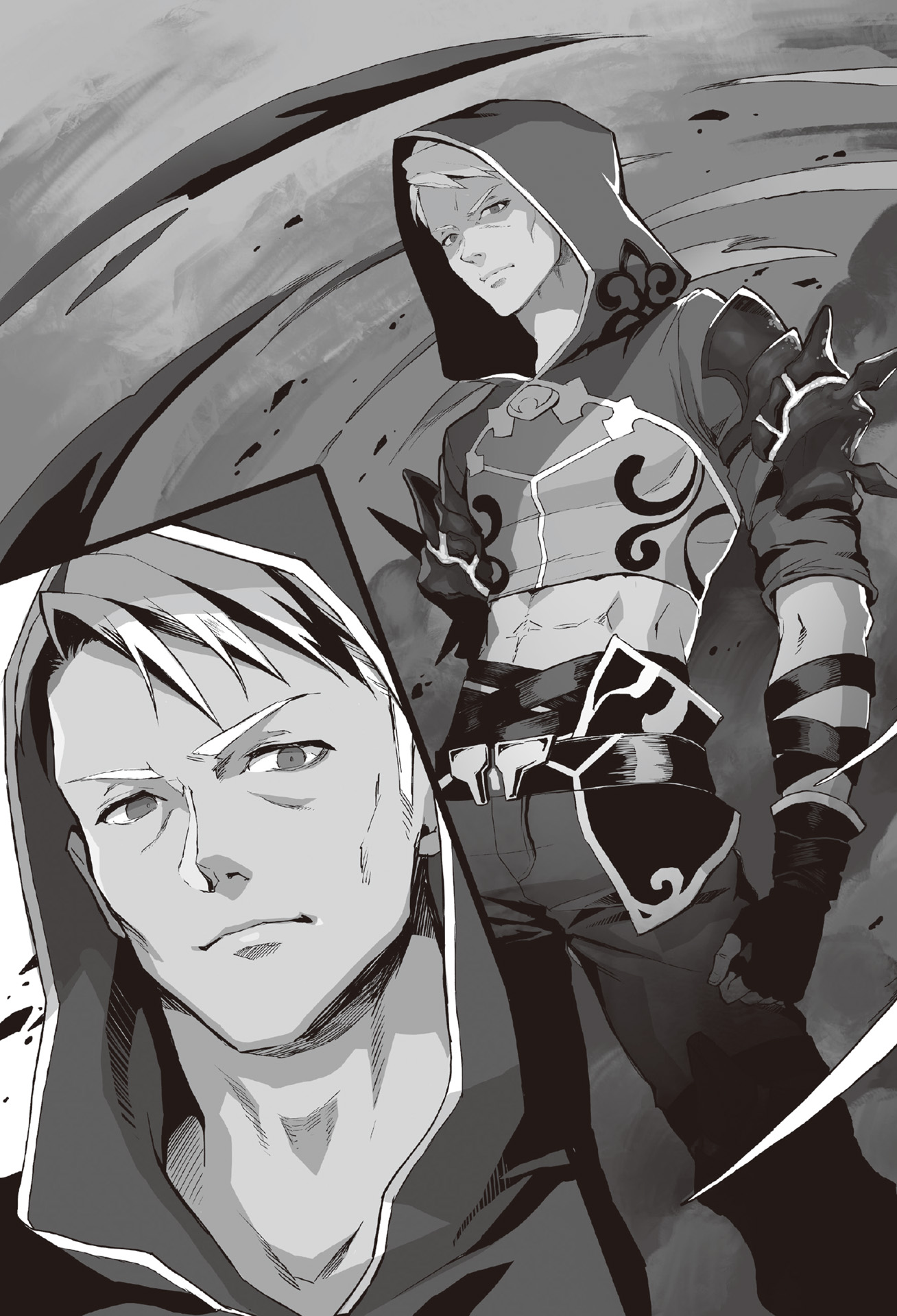 Since he had taken on human form, I wondered if it was a good idea to call him Kurogiri, so I asked him what his name was before he died, but he said he couldn’t remember his name.

I don’t know if that is true or not, but he told me to call him Kurogiri, so I decided to keep calling him Kurogiri as before. Also, although he doesn’t say it, he seems to have memories of the time he turned into that lump of meat.

I don’t know if he was quite shocked to be turned into a lump of meat or shocked that Shamanile did it to him, but he’s fussy about practice and will practice in human form. It was a mistake for me to ask [God’s Supper] to return him to the “Original” Kurogiri, but…

“Yes, yes, after I enjoy the kotatsu some more.”

“Just one yes is enough! Besides, you don’t need a kotatsu, since you’re equipped with a temperature control system, Tsukuru!”

“No, I’d rather relax in a kotatsu than get warm like that.”

“You can do that after we defeat Shamanile!”

He was originally a bit of a nag, but his human form seems to have spurred him on further. Besides, I lost my sight and was blind earlier in order to turn him back, right? So, a little bit of relaxation wouldn’t be that bad for me, you know?

Shall we check the status of everyone, including Kurogiri, who has undergone a significant change here?

Indestructible: A skill that is sublimated from [Unbreakable]. One that will never be destroyed.

Special Moves (5): Heavenly High Thunderbolt Flash Fang Slash. Fast and strong as a lightning bolt roaring in the heavens, it releases a slash that cuts off evil and annihilates the wicked.

Fighting God Swordsmanship: Allows the wearer to take the form of a divine sword at will.

Humanization: Allows Kurogiri to return to the form he had before he was turned into a sword.

Master of the Labyrinth: A title given to those who manage the labyrinth. It increases the effectiveness of the skill [●●Keeper].

For some reason, I got “Master of the Labyrinth” added to my title. I don’t think Shamanile had a title like this, but why me?

Title: King of the Dead

Legion Leader: Command his subordinates as he sees fit, and reinforce them without fail. I will crush anyone who stands in my way.

Beeze is no different, and his level equals my level, which is 600. Moreover, after learning one unique skill, the quality of his undead army has increased as well as their numbers, and it’s so vicious and untouchable.

I don’t think I can be compared to Canaan in terms of magic anymore.

Isn’t Hannah the opposite of Canaan and the best vanguard? I wouldn’t want to fight Hannah in close combat.

Sanya is excellent at eliminating her presence. Even I wouldn’t notice if Sanya really wanted to hide her presence.

Unique Skills: [The One Who Controls The Wind] [Enchanting Eyes (2)]

Titles: Elf Founder, The One Who Imposes Trials, Ruler of the Wind

Enchanting Eyes: Creates a state of attraction by making eye contact with those of a lower level. This charm is very powerful.

Third Life: You have three lives, up to two of which can be resurrected even if you lose a life. The time it takes to revive a life is one life per day.

Antia developed [Enchanting Eyes (2)] as a unique skill, but most of all, she was surprised to see the [Second Life] of the Ancient Skill sublimated to [Third Life]. With this [Third Life] sublimation, she gained a third life, but even more than that, the resilience of recovering one life in one day was very gratifying. In the case of the [Second Life], it takes a hundred years for the number of lives to return, so I am genuinely grateful.

I think Ichinose did an excellent job. When we met again, her level was 62, but now even the ancient breeds wouldn’t be able to beat her. Shamanile’s level is still higher, but Ichinose is a good match for him, it might be tough to beat him, but I think she can win.

God Voice: An integrated sublimation skill of [Word Spirit] and [Whispering]. You can control your target at will.

Among us, Allie has grown the most. After all, when she came to me, her level was only 19. Now it’s 570. Her physical combat power is quite high because of her [Fine Swordsmanship (5)], but Allie’s real strength lies in her singing ability. In addition to the three skills of [Singing (6)], [Sonic Voice (5)], and [Loud Voice (6)], her unique skill, [God Voice], is heinous. It works even on deaf people, so no matter what the opponent is, they can’t resist Allie’s [God Voice].