Chapter 7 – You In Exchange For All The Rewards

In the middle of summer in the royal capital, it’s the exact opposite of the cold in the Baltic, which is bad for the body.

Also, while it was nice that there was no snow, it made Ain feel a little inadequate.

Returning to the White Rose Station, Ain steps out onto the platform and waves to the commoners on the lower level.

A little to the side, Martha and the castle servants were waiting for him.

“I’m back. You may go and talk to Lloyd-san and Dill if you want.”

“No, thank you. I don’t mind, they won’t die if you leave them out in the Baltic cold, and I know they’ll live anyway.”

It’s not a bad thing to think of this as a kind of love. They trust each other in some way.

“Lloyd-san has been a great help to me.”

“That is an unworthy thing to say. With those words, my husband will surely fly to heaven.”

“Well, what do you mean? I don’t like to think of my husband very well because he didn’t stop Ain-sama, who should have been stopped, and made him fight a powerful monster.”

Yes, there was the matter of the Upashikamui.

Once he returned to the castle, he would definitely be questioned by Sylvird, an event he could not avoid. His stomach began to ache, but Krone, who had come down late, whispered “Don’t worry”, in his ear.

“Err, how was the royal capital?”

“Nothing much here. The castle was lacking without Ain-sama, and everyone seemed to be lonely. Especially Olivia-sama. Also… Chris-sama seemed very restless.”

What does it mean to be restless?

Ain had a question mark on his face, but he couldn’t imagine what it was like.

“I’ll give them time to talk when I get back.”

“Can you do that? You have a party to go to tonight, though, so you may not have much time.”

“No. Ain-sama went to Baltic on official business, you know. And then there’s the matter of the monster. It is said that it was Ain-sama’s power that defeated the monster in the end. If we don’t celebrate this, it will cause dissatisfaction to His Majesty Sylvird.”

From beside Ain, who nodded as if he had no choice, Krone stepped forward and asked Martha.

Krone thought it would be better not to ask, but she did. She was a little confused about what to say, but she decided to ask.

“How should I say this…? She wandered around the hallways of the castle for no apparent reason, and during her training as a royal knight, she became distracted…”

“No. She was just spaced out and forgot to adjust her moves, injuring her opponent.”

On the contrary, the fact that she couldn’t adjust herself to the situation makes Krone laugh as if she were in trouble.

“I know. I’ll arrange a time to talk to her later.”

Krone’s eyes narrowed in satisfaction at the reply.

“All right, let’s get back to the castle ── Krone.”

Just before they reached the stairs leading down to the station platform, Ain grabbed Krone’s white hand.

“Thank you. Is it okay if we continue down as it is?”

“Of course. It is indeed embarrassing to go outside, though.”

Their natural behavior revealed the distance between their hearts.

When they were a little farther apart, Martha couldn’t help but say to herself.

“…Chris-sama needs to assert herself more, or she’ll be left behind.”

That’s what she thought.

At night, a glamorous party was being held in the hall of the castle.

Ain was accustomed to these kinds of events, and now he was completely unaffected. The continuous greetings from the nobles at the beginning of the party is always tiring, but once it’s over, it’s easy.

When he finally felt at ease after exchanging a few words slowly with Olivia, he realized,

“What is the correct response to the elf staring at me from such a small distance?”

A female figure peered at him from behind a pillar. Her beautiful blond hair, like silken threads, was hidden from view, and she occasionally glanced at him. 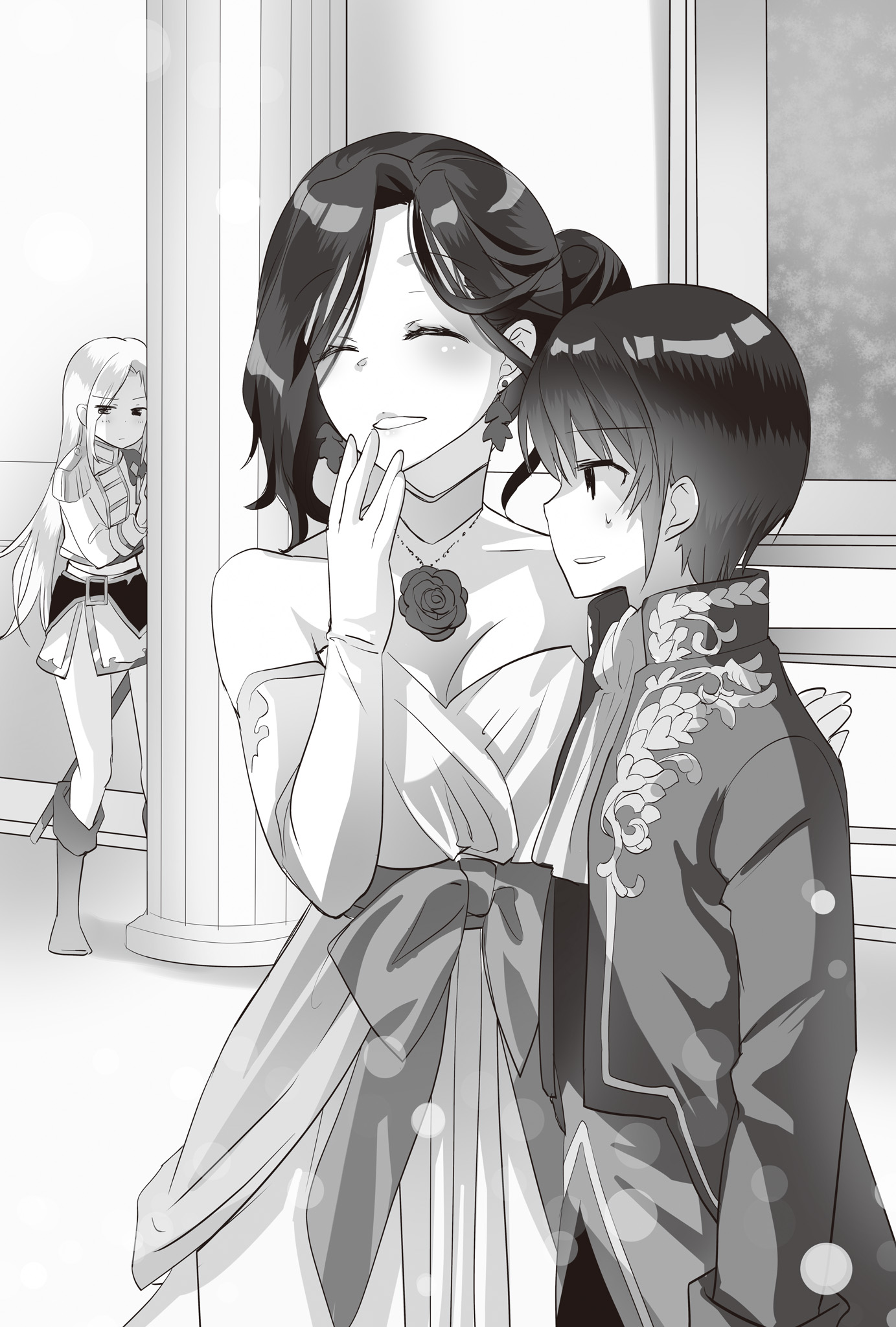 When her eyes almost met his, she would instantly disappear from Ain’s sight.

“She must be a little confused in front of her master after such a long absence.”

Although she’s not a dog, she’s not so far away in terms of her behaviour.

“Chris-san thought I couldn’t see her face until now; how did she end up there…? I mean, mother, aren’t you more of her master?”

“She just can’t come and talk to you, you know.”

“That means I should go first, right?”

“Yes, that’s it. You have to be more forceful than usual with Chris now ── Oh, arara, you’ve turned red. Do you even get embarrassed with me?”

“Fufu, thank you very much.”

As usual, she is very good at making Ain fawn over her.

After a lusty smile, Olivia whispered once more,

“I think the terrace would be lovely. However, it would be unbecoming for the crown prince to go alone, so please take at least one of your guards with you.”

Olivia then left Ain’s side and walked over to Laralua’s side.

At the perfect time, a waiter walked up to Ain and handed him two glasses.

“Would you prefer to have one?”

After a moment’s thought, he understood the intention.

When he saw the waiter bowing and quietly leaving, Ain let out a huff.

“──Chris-san, escort me to the terrace.”

He mouthed the words in a voice that wasn’t loud enough to echo in the hall but a little louder than normal speech. Chris, who had been watching Ain, couldn’t have failed to notice it.

She shivered for a moment and then quietly stepped out from behind a pillar.

She was wearing a knight’s uniform, but today she didn’t have any armor on it. Her hair was down, a rare sight in public, and it was refreshing.

“Yes, I called for you. Follow me to the terrace.”

Then, after a slightly flustered gesture, Chris followed Ain, shaking her hair.

Normally, Ain would wait for a response before walking. But now, Ain followed Olivia’s advice and was a little more forceful.

“You’re letting your hair down today, aren’t you?”

She also has the status of a knight. So naturally, she couldn’t wear a dress.

But she doesn’t want to look dull. So, she had no choice but to use accessories, makeup, or her hairstyle to put on a glamorous look.

When he looked at Chris, who was quickly stroking her hair, he could see that she had braided her hair above her ears.

“Yes, I think that kind of hair looks good on you. It’s a pity that I only get to see it once in a while, though.”

Chris couldn’t answer, so she turned her head over and her face dyed bright red, up to her neck.

While they were doing this, they went out to the terrace, where the night was quiet in contrast to the bustle of the party.

The lights of the castle town twinkled, and the starry sky seemed to be above and below them.

“It’s so cool outside. I was a little heated, so this is just right. Are you okay, Chris-san?”

“I’m glad to hear that. Then let’s have a little drink and relax.”

Chris had been wondering why there were two glasses, but now she understood.

Is she still a little stiff?

Chris’s attitude made Ain think so, but it seemed to have improved when she approached him to pick up the glasses.

“How was it over here while I was gone?”

He had brought Chris here, but he didn’t know if there was anything to talk about.

So he decided to make some small talk.

“…It was a peaceful royal capital as usual. The castle was the same, Katima was lively, and the sea dragon twins were adorable. The only difference is that Ain-sama was not present.”

“I’m back now. So there is no problem anymore, is there?”

“Ahahaha… Right. If you stay for a long time, there will be no more problems.”

Chris smiled dryly and put her glass to her lips. Chris put her hands on the stem and looked down at the castle without moving.

Eventually, she spoke up.

She held the glass in front of her chest and looked straight at Ain.

She took a few restless breaths and turned her head to gather her courage. Then she looked up, she conveyed a determination to Ain that she had never shown before.

“If it were true, this would be unacceptable. But I want to ask you one thing. Will you listen to me?”

She looked at Ain with a strong will but also with a pleading and dependable look in her eyes.

She tied her lips tightly and waited for an answer.

“I want to listen to Chris-san’s request. But if you want to stop being a knight, I have to stop you, so please say something first.”

Then a wind blew in response to Chris’s courage. Her golden hair was swept wide, making her look as divine as an angel from a holy painting.

“…I was worried about you.”

“Do you remember? I think the first disturbance for Ain-sama and me was the bomb scare in the academy district. After that, we went to the Sea Dragon, and then at Ist, we snuck into the Tower of Wisdom. On the way back, we also fought against the enhanced wyvern… We have fought together a lot.”

Her dignified expression and azure eyes are directed at Ain.

“For me, it was a matter of course to be able to be by Ain-sama’s side now. So when I heard that Ain-sama was fighting somewhere in the distance, I hated myself for not being able to do anything about it, and I wondered why I wasn’t fighting alongside you ── I was so heartbroken.”

She lowered her eyes, and her cheeks flushed. Her lips quivered in fear, and her shoulders shook.

“I can’t stand the thought of Ain-sama being hurt… when I’m not present.”

“…Chris-san is a marshal. I can’t allow myself to monopolize you.”

The job of a marshal is never just for Ain. It’s no exaggeration to say that the safety of the castle, the royal capital, and the entire country is at stake.

Chris came closer to him.

“I still wanted to protect you, Ain-sama…”

Ain calmly says no. She knew that. But she didn’t give up and was able to tell him her feelings. A single tear rolled down Chris’s cheek, but she couldn’t force him anymore.

It was disrespectful, but she couldn’t bear to be in Ain’s presence.

Just as she was about to do so and run away.

Chris looked at Ain, who had started to think about it, and tilted her head, forgetting the sadness she had felt earlier.

“I can’t allow it because you’re a marshal. If that’s the case, I think there’s still another way…”

“Yes, another way. It’s not recommended in any way, but it’s possible. That’s why this evening, I’m going to get all the rewards I have accumulated.”

Chris had no idea what he was talking about. But Chris was defeated by Ain’s strong words, and she just stood there, unable to say anything.