“Hah… hah… I’m sorry, this is an emergency! Is Lloyd-sama here?”

Lloyd, standing next to Sylvird, answers the knight’s voice.

“Hi-His Highness is…! His Highness has escaped from the underground laboratory! It seems that he is heading outside!”

“──Katima, did she help him?”

“…Your Majesty. Even if it’s Katima-sama, she won’t be able to open the seal that Majolica-dono created from the inside, will she?”

Admonishing Sylvird’s grief, Warren looked at Lloyd, who was confused himself.

“We can ask about the methods later. Your Majesty, I will now go to stop Ain-sama.”

Despite the unforeseen circumstances, Marshal Lloyd remained calm. The only thing on his mind is that he will do everything in his power to protect the crown prince’s safety ─ that’s it.

Sylvird was relieved. Lloyd said with confidence, the method of escape can only be questioned later.

“You can use the royal knights as well. Stop him at all costs.”

It’s difficult to even for Lloyd to stop the movement of the current Ain with a head-on physical battle. Lloyd understood that, so he picked up the edgeless sword that was displayed in the council chamber.

“I don’t mind. If you can stop him with a few injuries, I’ll turn a blind eye to your actions.”

──And Ain, on the other hand.

He has just left the lab, but for some reason, Katima is walking alongside him.

“You’re not going to stop me now?”

“There’s no point in trying to stop you now-nya. I can only pray for your safety-nya.”

Even though she was talking lightly, Katima’s worry was palpable.

“Well, now. This is where I’m leaving you-nya. I won’t forgive you if you don’t return safely-nya!”

Suddenly, Katima started running with a lively rhythm. Although it was still far from the crossroads, she noticed something and left Ain and went to her room.

The reason was obvious as soon as they left the basement. A woman was leaning against the side of the passage leading to the hall.

“Hello, Ain. …I haven’t seen you since last night.”

In the last few years, she has grown even more beautiful, and when she called out to Ain, he naturally stopped in his tracks.

“Yes, it was last night. I’m glad to see you again today.”

“Fufufu… I’m honored to be called that by Your Highness the crown prince. How about it? Would you like to come to my room for a cup of tea?”

Even at the Liebe Girls’ Academy, where many young ladies gathered, she was so popular that she was touted as the second coming of Olivia. The mere sight of her walking from the train station to the academy was enough to make many of the opposite sex falls in love with her, and she was even proposed to in the street.

Many men wanted to have a relationship with this beautiful and highly educated girl, but their wishes were never fulfilled.

Needless to say, the reason is Ain.

“I would be nervous about having tea with someone as beautiful as Krone.”

“Well, that’s embarrassing. …Let’s go to my room, shall we?”

The reason for the acting is because of the turmoil in Krone’s heart. It’s the result of a desperate attempt to conceal her feelings and avoid becoming distraught in front of Ain.

“I appreciate the invitation, but I have a prior appointment today.”

“…You are a terrible person. I invited you with all the courage I could muster.”

“I’ve got some big fish to kill. I’ll pick up some delicious seafood from Magna on the way back, and we can have dinner together later.”

However, no matter how much she invited him, Ain didn’t accept it. She even went so far as to brush her hair with her fingertips, trying to entice him, but he still refused.

“…Are you really going?”

“Even if I stop you this way?”

“What if I told you that from now on, you could have all of me for yourself?”

They exchanged a little smile at the end. Krone and Ain hugged each other tightly, and then she quickly distanced herself and bent down to look up at Ain.

“…My lord has made up his mind to this extent, huh? Is it tactless for a woman to keep begging and pleading with you not to go?”

As she said that, Ain replied while brushing her hair.

“It’s not tactless, and I’m glad you’re worrying me. …So, just wait for a little while, okay?”

Krone’s expression made Ain’s heart beat loudly as he smiled back stoutly, even though that little bit was a long time.

She moved her body away and gave way to Ain.

“Thank you. I like that part of you, Krone.”

“Hmm? Did you just say that you like me?”

“A-ahahaha… um, I’ll tell you about that another time…”

The reason he can’t speak honestly about his feelings is because he’s too embarrassed. It was frustrating, but Krone allowed it since she knew that it was typical of Ain.

“Women will be more pleased if you say that at least once in a while, you know? You should remember that, okay?”

It was good to talk to her here. The energy in his body began to build up even more, and he nodded strongly that he would be able to do his best in Magna.

──A moment later, he was about to pass by Krone. But she approached Ain once more.

“Hmm… take care. May the goddess bless you.”

Surprised by her warm and soft touch on his cheek, Ain blushed.

“It’s a blessing that’s guaranteed a win, but does it have to be with your mouth?” 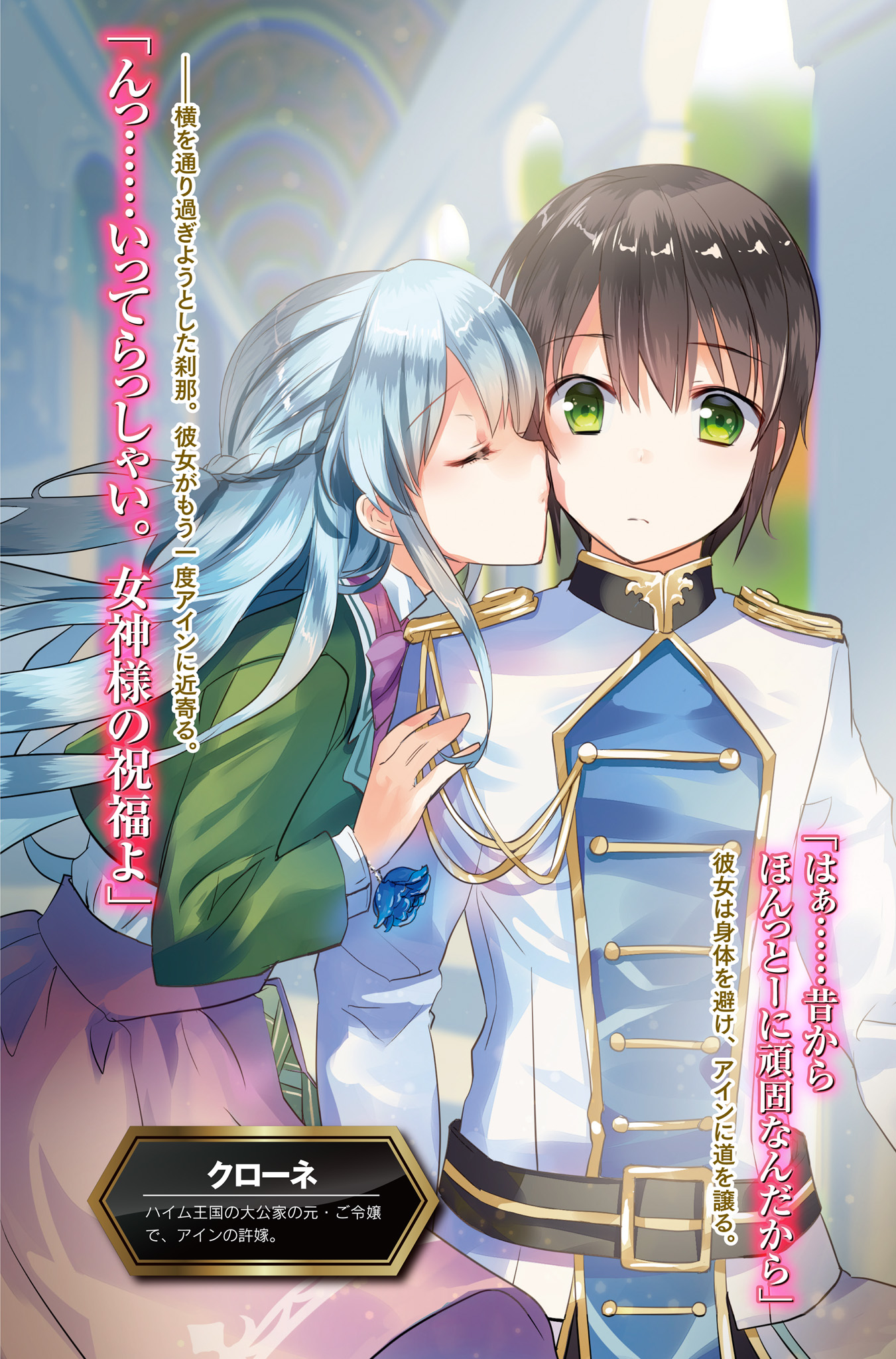 “I’m just imitating you, Ain. Shouldn’t you answer me by saying… see you later?”

Krone never showed any tears as she tried to see him off; she doesn’t want to show any weaknesses so that he can head off with his head held high.

As soon as Ain left, a large tear ran down her cheek. She wiped it away with her index finger and clasped her hands together in prayer to God.

She prayed desperately for Ain’s safe return, and that was all she could do. 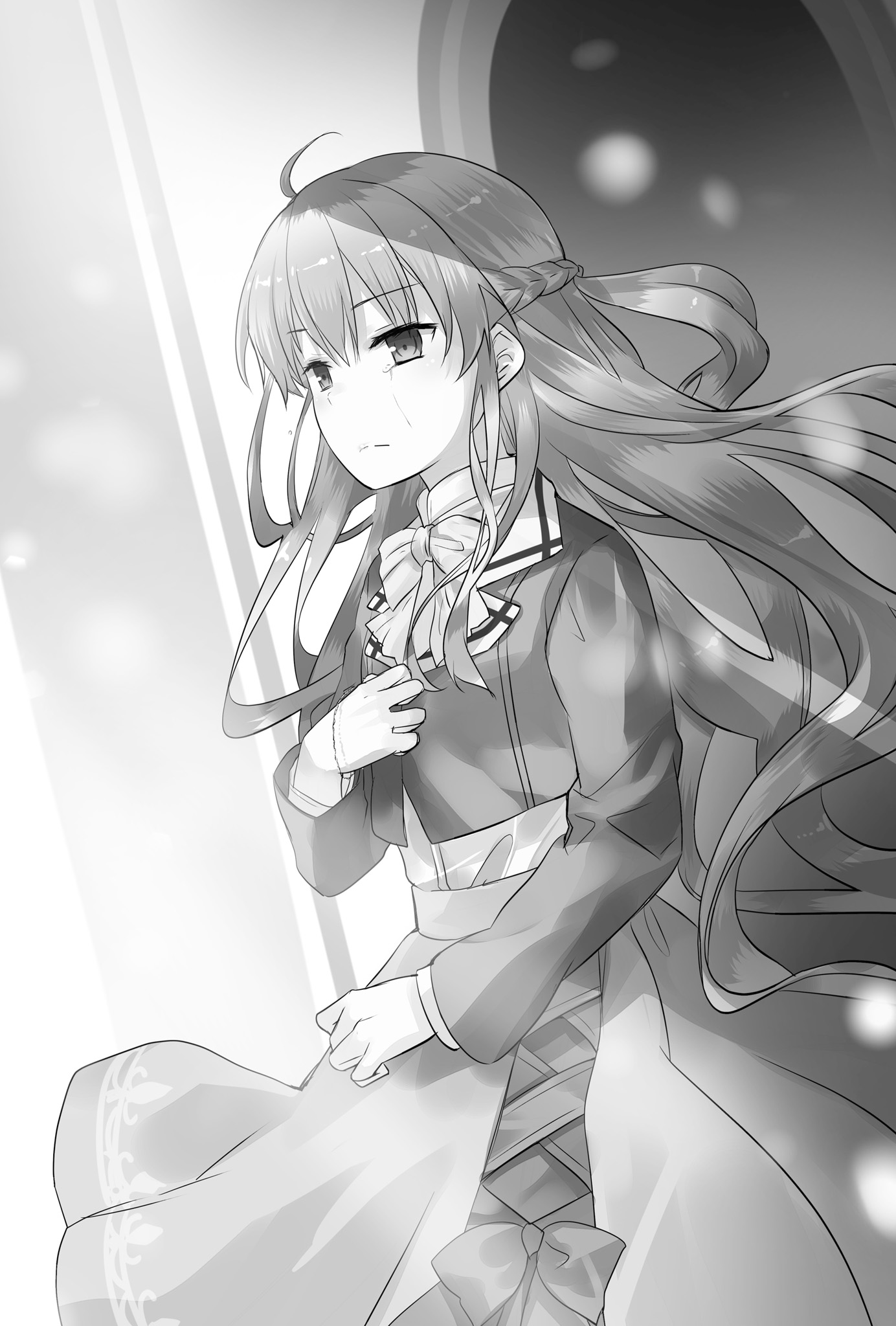 Running off by himself, Ain headed for the Great Hall. He had to open the door, get out and hurry to the White Rose. He knew it would not go smoothly anyway, but as expected, there was already a big obstacle waiting for him in the hall.

“Hello, Ain-sama. How are you today?”

Many royal knights lined up in front of the door to the outside, and Lloyd was a few steps ahead of them.

“The weather is perfect, isn’t it? …So, where do you want to go in such a hurry?”

He knew this would happen. Now, it’s time to get down to business, Ain said, bracing himself. His opponent is a marshal. One of the strongest in the unified state of Ishtalika. Although he knows he can’t win, he can’t just stop now.

“Since the weather is beautiful, I thought I’d go outside and relax. Do you want to come with me?”

“Fumu. I apologize for refusing your invitation; I haven’t finished my work yet, so…”

“That’s too bad. Well then, I’ll just have to go myself.”

“You can’t do that. You need a guard to accompany you. So… where are you headed?”

The atmosphere changed with those words. Ain feels like the glass windows are vibrating as well. He had never felt the power that Marshal Lloyd exuded before, and the pressure was such that he could not think of anything that could compare to it.

The royal knights seemed to be under pressure, and their foreheads were sweating.

“I thought I’d like to see the sea. I also wanted to get some good seafood…”

“…You are a splendid man. Then again, I can’t send the treasure of Ishtalika to the dead.”

The reason why Lloyd praised Ain was because he was not pressured.

Then, Lloyd took a big step forward to signal his words.

“I will definitely… going to Magna…!”

If there had been even a moment’s delay, Lloyd would have been in front of Ain. It was on such a brink that he managed to use his power.

He emitted the same thing that stopped Katima’s movement and stopped the movement of everyone, including the royal knights.

Not only the principle but also what it uses is not understood in mind. But deeper down, in a place like a soul that cannot be put into words, he somehow understood.

“…It seems that you’re destroyed the seal, and also the technique that you used to stop this movement. Ain-sama seems to have suddenly become stronger.”

“…Lloyd-san seems to be quite relaxed, though. When the time with Katima-san, she seemed to have a hard time talking.”

Sweat is visible on Lloyd’s forehead as he speaks. He may be trying desperately to move his body even now, but his body is not entirely free.

However, he shoots Ain with his sharp eyes as if he is about to move.

He said it as if he was running away and walked faster than usual. As he passed by Lloyd and the royal knights, he stopped and listened to the voice that reached his back.

“The winner is the one who has the right. And the loser has no right to complain. But Ain-sama, are you going to do as you please? There are many responsibilities that come with it, so please do not forget that…”

Although he was curious about his true intentions, Ain did not want to miss the opportunity to open the door and go out.

Ain ran with all his might as soon as he could and continued toward the White Rose.

“Good grief, he really is an extraordinary person.”

In the hall, the royal knights were still frozen in place. Lloyd muttered to himself. He wondered what to do when Warren, who had arrived late, let out a cry of surprise.

“I don’t know what happened, but I do know that Ain-sama has gone. It seems that our crown prince is a more mischievous person than Olivia-sama.”

Lloyd, with his body full of energy, raised his voice. Along with the popping sound of something, his body regained its freedom.

“I wish I could say it was, but alas, I was completely unprepared earlier. It is correct to say that the distance between Ain-sama and me has become so great that I am able to disarm it.”

“Hmm… does Lloyd-dono know what he did to you?”

Those magic could be easily prevented with equipment made of monster materials. However, what everyone was wearing was normal equipment, and the fact that they weren’t wearing anything for the defense was the reason for their defeat.

“…Umu. I’m embarrassed to say this, but please do.”