Hiro looked at the sky with a gentle smile on his face.

(I’m going to die here so that my plan can be fulfilled.)

Even though many people have sacrificed their lives on the ground, the sky remains clear and unconcerned.

The azure sky that stretches out endlessly is truly the one and only ruler of the world.

(I bought some time… I left a way for the Great Grantz Empire to survive.)

Hiro challenged this battle by imposing a discarded pawn on himself.

(Liz… i hope you’ll forgive me for saying goodbye to you through a letter.)

With a self-mocking smile on his face, he looked down at the ground again, and the noise around him faded away.

(This is a test of your capabilities as an emperor. So, please don’t overlook the options that lead to victory. If you make one or two mistakes, that’s fine. I’ve left countless possibilities open.)

Hiro picked up his own coat of arms flag that had fallen to the ground and set it up again.

Hiro formed a fierce smile like a beast and clutched the “Dark Emperor” with his left hand again.

Standing in a place where there were no allies, he stared at the enemy who was approaching, stepping over the corpses of his dead allies.

The enemy was clearly agitated. They were shaking with astonishment as though it was reckless.

“Try to see if you can surpass despair.”

He gave a flash to the approaching enemy. It was a light swing, but the power that went into it was extraordinary.

In the blink of an eye, a number of red blossoms bloomed in the sky.

Before they had time to scream, multiple heads hit the ground, making an eerie sound.

“He’s on the verge of death! There is no time to be distracted, just kill him quickly――!?”

He dropped the head of the enemy that was buzzing around his ears.

Everyone was aiming for Hiro’s head, so it was like there was no formation at all.

“So, now that I have recovered, I think I’ll go on a rampage.”

He tried to be tough, but to tell the truth, both of his knees were trembling as if they were about to break. His physical strength had already been depleted. But that didn’t mean he could give up so easily.

There were people waiting for him, so Hiro kicked the ground with all his might.

He only aimed at the commander class and only killed the soldiers in his path that were in his way.

(This situation is… not good. I need to be more conspicuous.)

He was surrounded by more enemies than he expected. This is going to hinder his plans.

“Enough, just give up already!”

The commander tried to draw his sword from his waist, but Hiro instantly kicked it away from him.

“You’re unarmed; aren’t you afraid for your life?”

Without giving the commander time to draw another sword, Hiro kicked the hilt and jumped.

“…Don’t let your guard down on the battlefield.”

He twisted himself in midair and vigorously chopped off the head of the commander.

Then, with a natural motion, Hiro landed on the ground and looked around him.

What came into view was enemy soldiers holding their bows at a distance. A great number of arrowheads were pointed at him. Even so, Hiro did not stop smiling coldly.

“Good. Your decision is not wrong.”

People made weapons to defeat monsters because they could not win with their own strength. The bow is a prime example. You can overwhelm your opponent with the number of moves you can make.

“But it’s not something you can fire at close range, is it…?”

When Hiro muttered in exasperation, the enemy commander’s order was followed by a storm of arrows blasting the ground.

If he took evasive action, the arrows would pierce the enemy soldiers swarming behind him. He thought it was pathetic and even felt sorry for them.

In order to defeat just one person, how many people must be sacrificed to make it worthwhile…?

But the commander who can make a ruthless decision is strong and knows that hesitation creates an opening.

“Hah, what a good decision. There is no hesitation in that… you are definitely planning to kill me.”

Now that the absolute defense of the Black Princess Camellia has been sealed, there is only one way to prevent the oncoming arrow.

With only one of his arms left, he could only use the single sword in his hand to repel the barrage of arrows.

In other words ― it was all he could do to avoid a fatal wound.

When the violent storm passed, the place where Hiro was standing was filled with so many arrows that he had no place to step.

Moving his feet, which were sewn into the ground, Hiro took a step forward.

(Did they take my right eye…?)

He rubbed the dark haze with the back of his left hand and got a slimy, eerie feeling back.

That’s not all. Hiro realized that he had lost other things as well.

“My troops are first in line! You’ll be rewarded handsomely! Let’s finish him off――!?”

He attacked nonchalantly like a machine repeating its work.

He stroked the head of the agitated enemy soldier and slashed it open, crushed the skull of the unsettled enemy soldier with a single swing, and then plucked the life out of them one after another with the “Dark Emperor.”

He suddenly lost the strength in his knees and fell down on the ground helplessly.

He couldn’t move a single finger. With his face pressed against the ground, Hiro felt his vision narrowing.

They grabbed him by the hair and forcibly lifted his head. The faces that flashed into his hazy vision all had expressions of greed on all of their faces.

When the blade was pressed against his neck…

Luca appeared in front of him, breaking through the wall of soldiers.

“Good grief… you’re really not cut out to be a commander, stealing the show from your subordinates.”

Lucia appeared next to Luca, stepping on the gravel.

“But then again, your struggle is in vain, is it? You can’t run away, and you can’t overturn a losing battle even if you go on a rampage.”

Lucia raised her eyebrows as if she were looking at a strange creature.

“No… the Six Kingdoms are losing, you know ― can’t you hear me?”

“I don’t hear anything. Have you gone crazy from dying?”

“…Maybe, I don’t know. But I can hear the sound of the Six Kingdoms collapsing.”

“I can see your life fading away.”

He knew Lucia’s plan from the beginning.

He was aware of the fact that the head of the Mark family and other central nobles were in cahoots with her, as well as the fact that she had the western nobles, including Kyrthia, in her corner.

It was obvious that their existence would be a hindrance in the future, but if he killed them without showing evidence, he would surely be criticized, so how could he get rid of them at the same time?

As a result, the Grantz Empire was able to buy enough time to prepare its forces.

“…I knew you were reading this. But I’m satisfied with the situation since my goal was only to get your head.”

“I’m happy with the situation, too.”

“My plan will be completed with the death of the hero.”

“…Did you think I wouldn’t cut off your head if you threatened me?”

It is a fact that warriors of great renown are often deified after death. If a person is praised as a war hero, he is likely to be revered as a god of war.

In the military state of the Grantz Empire, Hiro’s death would be used to great effect in the future.

Hiro’s death will help the people understand the war, and his deification will boost the soldiers’ morale. It could also work to the advantage of diplomacy with neighboring countries.

“Even at the cost of all this, the head is still more valuable than the rest.”

“…That’s fine. It is necessary for the fulfillment of my plan.”

“You never stop talking, do you…?”

Lucia sighed in exasperation and closed her iron fan.

“I’ll kill you, then! Queen Lucia, stand down!”

“I’ve been waiting for you, you know?”

Luca’s intense anger caused Hiro to drop his gaze to the ground.

Hiro carved a wild smile as he looked at the small stone that shook slightly.

Immediately afterward, a blade swung vigorously down on Hiro’s neck.

On top of a hill at sunset, she looked into his face, holding his sideburns.

“I don’t need a reason to help people.”

She smiled bitterly and shrugged her shoulders, grabbing his cheek gently.

Her physical punishment is penetrating the heart.

His mind is filled with guilt from being punished without pain.

“I’m not very smart, you know. I think I’m probably causing Hiro a lot of trouble. You see, I get angry easily and move without thinking things through.”

“Yes… you’re right. You were able to analyze yourself properly, weren’t you?”

She twitched her mouth as if she was expecting him to deny it. But she quickly regained her composure and put her arms behind her back, and folded her hands. 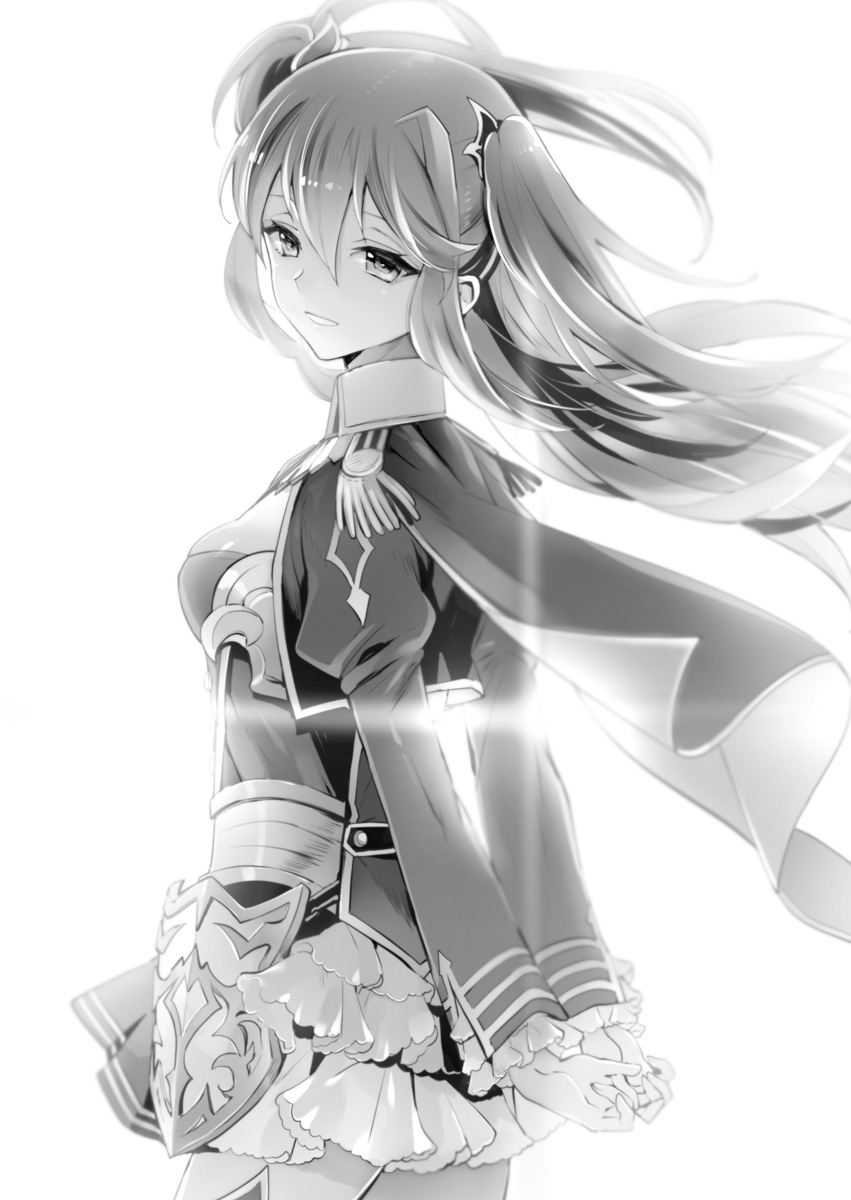 “Hmm… well, anyway, that’s why, Hiro, you should find out what you want to do.”

“Even if you say that… what’s wrong with you all of a sudden?”

“If Hiro really, truly, truly believes that I am worthy of the throne, then I need your help.”

(Even though they don’t look alike, her heart and soul are just like Altius’.)

He wondered what he would say if he came back to this time and saw Liz.

He would be surprised.

He would be shaken with emotion to see a girl who looked just like him.

(Even though they don’t have the same personality, she looks exactly like Rey.)

The future envisioned by his friends may not be the same as this world.

But… it will never fade away.

There was always good and evil in every era.

(Surely… the future you wanted is beyond her.)

Hiro narrowed his eyes as he watched the setting sun.

(…Until the day her will is sprouted…)

He had to protect her from all malice and keep her safe from all threats.

This is the mission that has been imposed on him, and it is the redemption of a man who has abandoned his past.

Hiro stretched out his still unreachable hand to the heavens.

――May her name reach you all.

The crowd was cheering.

In the midst of the violent dust, a cry of victory echoed around the world. The flag with the black dragon on it was burned and turned into ashes that flowed down the ground.

Many corpses with the lion’s emblem engraved on their chests were being trampled by the frenzied soldiers.

Forgetting the military code, they were all gazing at the same place.

One woman was holding a head up to the sky.

Some are quietly gazing at such clamor. Blending in with the soldiers, nobody could see them, but the air was clearly different here.

There is a chill in the air like cold air cowering and tearing at one’s guts.

Even though the soldiers around them were screaming with joy, their expressions did not change at all.

“The king’s presence is gone. The “usurper” is definitely dead.”

There was no joy on their faces, no sadness in their voices, no anger in their bodies.

Just the facts, spoken in a voice with no inflection.

“The time has come for us to emerge from the abyss.”

The wind trembled, and the air creaked.

A definite change ― and yet no one notices.

No one will notice the changes in the isolated world.

And with that, they disappeared unnoticed.